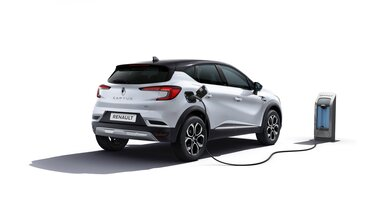 Looking at last month French market fuels split, disruption is happening before our eyes, with petrol dropping 11% in share regarding the same period last year, to 45%, while diesel is also down, albeit a moderate 3%, to 35% share, to the profit of all electrified categories, starting with HEVs, up 6%, from the 5% of last year, to the current 11%, passing by PHEVs that now have 4.7% of the market (up from 3.5% a year ago), and ending with the 6% of BEVs (6% in September 2019), allowing the 2020 PEV share to be at a record 9.5% (10.6% last month), which is a whole different level from the 2.8% of 2019.
Expect the numbers to improve slightly in the remainder of the year, with the 2020 tally probably reaching 10% until year end, which would not only be a great achievement, but also the prelude for the #Disruption '21 - French Edition
Looking at last month Best Sellers, the top 2 were the usual local heroes, but below them, we have the Tesla Model 3 Best Selling Foreigner, thanks to the expected end of quarter high tide.

But the real surprises show up just below the podium, with the Renault Captur PHEV jumping to 4th, thanks to a record 899 units, while the much anticipated Volkswagen ID.3 landed straight into #5, thanks to 616 units, with these two set to become regular presences in the Top 5.
Looking at the 2020 ranking, while the top 2 remain unattainable, the last position of the podium can changed hands, with the Tesla Model 3 climbing to 3rd, while below them, the Hyundai Kona EV surpassed the DS 7 PHEV, with the Korean crossover now reaching the 5th position.
The #7 Kia Niro EV also has a shot at surpassing the DS plugin hybrid, with the Kia model now just 48 units below the French SUV.

On the second half of the table, we have a few more position changes, with the Mercedes GLC300e climbing to #11, while the rising star Volvo XC40 PHEV jumped two positions, now at #12.
Another model on the rise is the Peugeot 2008 EV, now #14, while the VW Golf GTE, still with the Golf VII body, jumped to #18, thanks to a record 394 registrations, with the German model benefiting from stock clearance prices, to end its career on a high note.
The Renault Captur PHEV joined the Top 20, in #15, thanks to a record 899 deliveries, and is now only 78 units behind its Peugeot 2008 EV arch-rival, so expect the Renault crossover to follow the Zoe example and jump ahead of its Peugeot competitor soon.
Outside the Top 20, there are plenty of models ramping up deliveries, like the Audi Q5 PHEV, that registered 440 units, or the Mercedes A250e (382), while on the BEV side, we should highlight the Opel Corsa EV (400 units), that should climb to the Top 20 soon.
In the brands ranking, the leader is, as always, Renault (25%), with the runner-up Peugeot (19%, down 2%) losing some ground to the #1, while Tesla (6%, up 1%) has surpassed the local maker DS (5%), becoming the new Bronze medalist. 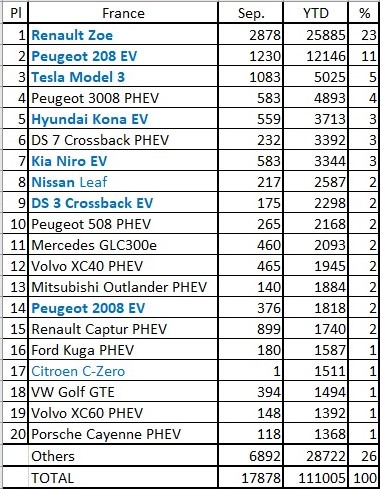