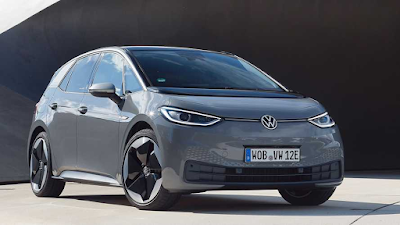 The German plugin market had another record month in September, with a little over 41,000 units, PHEV registrations continue going through the roof, up 463%(!), to 20,127 units, helping plugins as a whole jump an amazing 437% last month, with the plugin share reaching a record 16% (8% BEV), pulling the yearly tally to 10% (4.8% BEV), so this market has officially reached two-digits, also known as...The Disruption Zone.

And in an overall positive market (+8% YoY), petrol (-18%) and diesel (-6) continue falling, so the force that is pulling the market up is electricity, leaving fossil fuels as deadweights on the shoulders of Legacy OEMs...

There's no going back, and with the incentive changes helping sales in the following months, expect the status quo to be changed forever, and the S-Curve is ready to be surfed like Garret McNamara in Nazare... 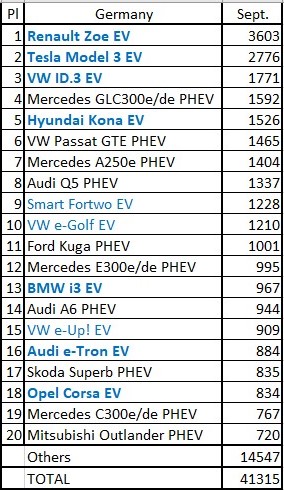 Looking at last month Best Sellers, in September the Renault Zoe broke all records, by registering 3,603 units, beating the high tide Tesla Model 3, that delivered 2,776 units, while the official debut of the VW ID.3 started in the 3rd spot, with 1,771 units, a somewhat disappointing result, but let's not forget that the new Volkswagen hatchback will only have its first full deliveries month in October, so let's wait for next month to make a more reasoned judgement on the ID.3 career launch.
Below the podium Top Sellers, the #4 Mercedes GLC300e/de jumped to #4 in September, benefiting from the launch of the diesel-powered version, registering a record 1,592 units, in fact in a record month, best ever performances are plenty, in the September Top 20, 11 models had record scores, 6 of them coming from the VW Group stable (VW ID.3, VW Passat GTE, Audi Q5 PHEV, Audi A6 PHEV, Audi e-Tron, Skoda Superb PHEV), highlighting the production ramp-up of the German conglomerate.
Outside this Top 20, we have several models in ramp-up mode, like the Volvo XC40 PHEV (500 units), or the 548 registrations of the peculiar Mazda MX-30, but the most striking deliveries ramp-up comes from Mercedes, with 5(!) models starting to be delivered in significant volumes, with the CLA250e sports sedan registering 553 units, its family-friendly sibling B250e delivering 418 units, while the adventurer GLA250e scored 483 units, the full size barge GLE350de had 352 units, and even the fully electric EQC had a record 349 deliveries. 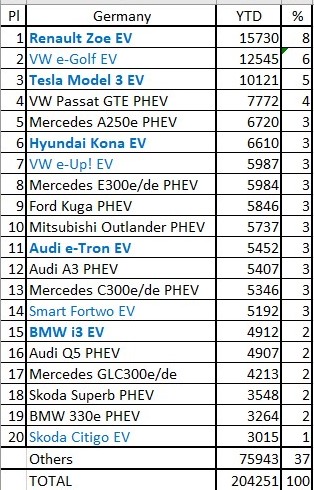 Regarding the 2020 table, the podium positions remained the same, with the 3rd placed Tesla Model 3 winning precious advantage over the #4 VW Passat GTE, but as things are, the leader Zoe seems to have the 2020 title secured, because the 5,500 units of advantage over the #3 Model 3 seem more than enough to keep the Californian in the rear view mirror.
The first position change happened in #7, with the VW e-Up rising one spot, immediately followed by the Mercedes E300e/de and #9 Ford Kuga PHEV, with both models jumping two positions.
Speaking of Mercedes, the three-pointed-star maker now has another model in the Top 20, its 4th(!), with the GLC300e/de joining the table in #17.
The other fresh face in the table is the small Skoda Citigo EV, that reached #20 last month, but that wasn't the only good news for the Czech maker, as the Superb PHEV climbed one position, to #18.
Highlighting the good moment of the VW Group, the Audi e-Tron jumped two spots, to #11, and still has hopes to displace the #8 Mercedes E300e/de from the top of the Luxury category.
In the brands ranking, Volkswagen (15%) leads the way but it is now being threatened by the rising Mercedes (14%, up 2%), that thanks to a strong (and long) PHEV lineup, is looking to reach the top spot. Those ID.3 (and upcoming ID.4) volume deliveries are coming right on time for the Wolfsburg brand...
The #3 Audi (10%) remains stable, while outside the podium, BMW (7%) was surpassed by Renault (8%, up 1%), deepening the crisis of the Bavarian maker in its home market.
On a final note, the Volkswagen Group total share is stable at 30% (VW - 15%; Audi - 10%, Skoda - 3%; Porsche - 2%), above the rising Daimler Group, with 18% (up 3%), or the 12% (up 1%) of the Renault-Nissan Alliance.

We have a fully electrified Top 5, although these models have various degrees of electrification, from the 16% PHEV share  (up 13%) of the Mercedes GLC, to the 74% of the Mitsubishi Outlander, passing by the 12% (up 4%) of the BMW X3, 17% of the Volvo XC60 and the 40% (up 15%) of the Audi Q5.
5 electrified models out of 5 is already significant, and with the Mercedes GLC PHEV and Audi Q5 PHEV in ramp up mode, things will look even better in a few months.
Full Size Car Best Sellers

The #2 Audi A6 was the most significant case of electrification growth, going from virtually zero in March, to the current 11%, but other models also have volume deliveries of their PHEV versions, with the #1 Mercedes E-Class hitting a significant 25% share (up 3%), while the #3 BMW 5-Series reached 11% (down 1%), and the #5 Volvo S/V90 twins had 20%.

Finally, the Mercedes S-Class jumped to 4th, but the big Merc has a low electrification rate (just 5%), something we hope the new generation will change for the better.

Full Size SUV Best Sellers
Unlike in other countries, the full size SUV category isn't on the forefront of electrification, with two models still very much ICE only, as the leader Mercedes GLE had just 6% of its sales coming from the PHEV version (the 350de version only recently started to be delivered in volume), while the #3 VW Touareg (2% PHEV sales) plugin hybrid versions are still in demonstration mode.

The #5 Audi Q7 had a significant jump in PHEV share, from just 8% in March, to the current 23%, while the BMW X5 PHEV is doing even better, representing 24% (up 5%) of the X5 sales.
Another good news is the full EV Audi e-Tron climbing to 3rd, surpassing the fossil fuel addicted VW Touareg.

With the new VW Touareg PHEV and Mercedes GLE350de ramping up production, it should be a matter of time until this Top 5 becomes fully electrified.
Published by José Pontes at October 16, 2020