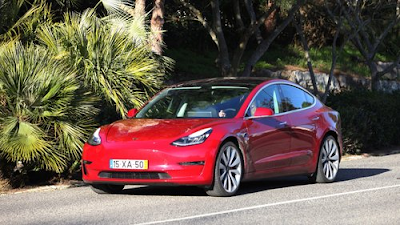 Tesla Model 3 #1 in 14% share market
With the overall automotive market is still in the doldrums (-39% YoY), plugin registrations hit a record month in September, with 1.844 plugins being registered, with the plugin share hitting a record 14% last month, with the 2020 result now at 11%.
But this great result is much due to plugin hybrids, that are currently on fire, growing 164% last month, to a record 1.138 units and 62% of the PEV market, while BEVs have seen better days, in September edged positive (+3%, 706 units), but YTD, the numbers are still in red (-4%), to 5.204 units, making this traditionally BEV-friendly market move firmly into PHEV territory, as these last ones now have 56% of the total plugin sales this year.
Why has this happened? Well, for one, the fiscal incentives for PHEVs are almost identical to BEVs, which make many fleet buyers buy plugin hybrids just because of the fiscal incentives, another reason is the weak charging infrastructure, that is insufficient to provide quality service to the already large number of plugins in the country, not only regarding quantity, but also reliability (a large amount of fast-chargers have significant hours of down time, due to weak maintenance) and speed (there isn't any fast-charger at over 50 kW charging speed). No wonder the Tesla Model 3 is #1...If nothing else, it's because their drivers have access to a country-wide network, that isn't down all the time and charges at 150 kW!
Speaking of the Best Sellers, the Tesla Model 3 increased its lead over the Renault Zoe, to 89 units, thanks to a September win (172 units), which in turn, the French hatchback also gained space between it and the #3 Nissan Leaf, now distanced by 61 units.

If the podium positions seems stable, for the moment, below it, the PHEV title is very much open to discussion, with the Mercedes A250e, a new local favorite, surpassing the BMW 330e and reaching #4, with these two winning an important advantage over the #6 Mercedes C300e/de.

Interestingly, 3 out of the 4 position changes benefited Mercedes models, besides the A250e climbing to #4, the E300e/de was up to #9, thanks to a year best score of 61 units,  while the GLC300e/de took full profit from the new diesel-engined version to jump to #18.
Funny enough, there is not one Volkswagen in the Top 20, and the only VW Group nameplate present is the Porsche Cayenne PHEV(!), in #16...Good thing then, that the VW ID.3 landed with a promising 72 registrations, so we could see a Volkswagen in this Top 20, after all...
Below the Top 20, a mention also to the 48 units of the Citroen C5 Aircross PHEV, in its full sales month, while the Renault Captur PHEV saw 30 deliveries also in its first full sales month.
In the manufacturers ranking, Mercedes (18%) is well ahead of the competition, being the first market where the three-pointed-star maker is #1, while following its tail, we have BMW and a rising Volvo, both with 11%, running for the runner-up spot, and outside the podium, we have Tesla (9%), followed by Renault and Nissan, the two with 7% share. 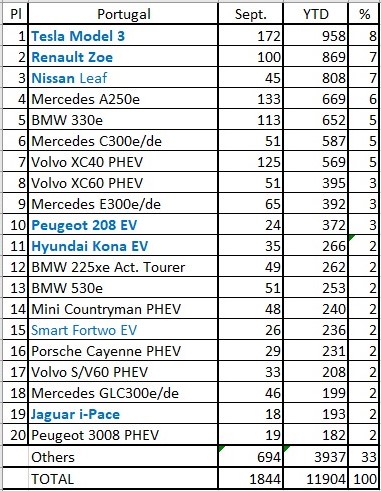 Comparing the Model 3 deliveries against its midsize competitors, we can see that the Tesla midziser has kept June's 3rd spot, so no news here.

We should also notice that the remaining models also have a significant electrification rate, with 48% of the leader BMW 3-Series sales coming from the PHEV version, closely followed by the 47% electrification rate of the Mercedes C-Class, while the 25% rate of the Peugeot 508 is not far off, although the French midsizer lost 4% share regarding June and 13% regarding March. Strange drop, isn't it?

In the last place of the Top 5, the Volvo S/V60 twins have reasons to celebrate, as they increased their electrification rate by 8%, to the current 41%, making this a 100% electrified Top 5.

Midsize SUVs
Electrification is strong here too, with the leader Mercedes GLC increasing significantly its electrification rate (23% rate, up 10%), all the other models have a large share of sales coming from their PHEV versions, with the Mitsubishi having a (surprisingly low) 60% rate, the new 4th placed DS 7 having 65% (up 9%), and the runner-up Volvo SUV an average 53% rate.
Surprisingly, the #3 BMW X3 dropped its electrification rate, regarding last June, from 40% to the current 35%.

On the other hand, the Audi A6, having risen to #3, only recently has started to deliver the PHEV versions, so its electrification rate (11%) is small, although it has increased 7% regarding June, and should continue to grow in the coming months.

Lots of changes in this category, first of all, the Porsche Cayenne (93% PHEV) is the new leader, having displaced the BMW X5 (57%, down 9%), while the Mercedes GLE (31% PHEV share, up 17% regarding last June) is the new Bronze medalist, having replaced the Volvo XC90 (79% plugin hybrid)
This is the most electrified end of the market, not only the ICE models have a significant electrification rate, but now we also have a BEV model in the Top 5, with the Audi e-Tron joining in #5.
Published by José Pontes at October 19, 2020