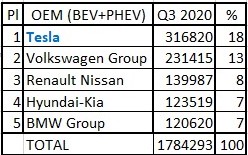 If we gather plugin sales by Automotive Groups, Tesla is ahead, with 18% share, down 1% regarding the previous June report, followed by the Volkswagen Group (13%), that increased the distance to the Renault-Nissan Alliance, to 5%, so the German conglomerate is midway between the #1 Tesla and the #3 Renault-Nissan.
And to think that 2019 ended with the Volkswagen Group in 6th, with 6% share, 2 points behind the Renault-Nissan Alliance and a whole 11 points below the leader Tesla (17%)...At this pace, the Germans could beat Tesla by Q2 2021. Bets, anyone?
Below the podium, Hyundai-Kia rose to 4th, at the expense of the BMW Group, with both keeping the 7% share they had in H1.
SAIC is now #6, with 110.000 units, benefiting from the success of the SGMW City EVs, and could displace BMW from the Top 5 by the end of the year.
With the plugin market this year growing at a 11% rate, while Tesla (+24%), Hyundai-Kia (+29%) and BMW (+17%) are growing at a slightly higher pace than average, but the Volkswagen Group is growing at warp speed (+168%), and it has been the OEM that has grown more in volume, in the past three months, beating even Tesla in that aspect.
On the other hand, the Renault-Nissan Alliance has seen its sales drop, by 1%, harmed by the slowing sales that Nissan and Mitsubishi have been experiencing. Maybe Renault could be better off seeking new dance partners (Ahem, Mercedes, Ahem)? 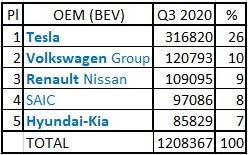 Looking only at BEVs, the leader Tesla (26%) lost 2% share regarding H1, but it is still 3% above the 2019 result, while the Renault Nissan Alliance continues losing share, due to Nissan's slowing sales, dropping by 1% regarding the last quarter, to 9%, and the Alliance was surpassed by the Volkswagen Group, that has kept its 10% score, which is double its final 2019 score (5%).
SAIC is also on the rise, jumping to #4, thanks to the Wuling and Baojun EVs, while increasing its share to 8%, placing the Chinese OEM 2 points ahead of last year 6% share.

Comparing with the BEV+PHEV table, the big defeated is the BMW Group, that due to its heavy reliance on PHEVs, disappears from the Top 5, to the profit of the BEV-friendly SAIC.
Published by José Pontes at October 30, 2020