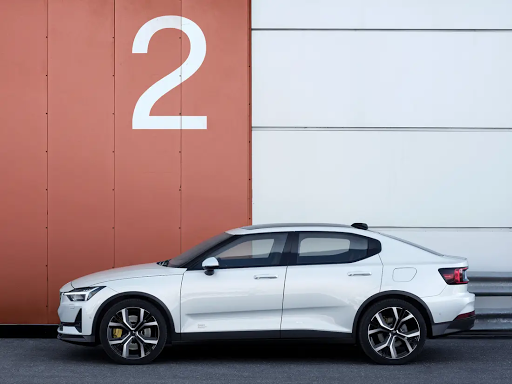 We start the month in Sweden, with the local plugin market jumping 174% YoY, to a record 9.885 registrations, with last month scoring a best ever 34% share for plugins, pulling the 2020 PEV share to 28%. And both technologies pulled the market up, with BEVs only representing 37% of plugin sales (29% YTD), thanks to new hot models and a Tesla high tide, with BEVs now having 8% share of the total market (13% in September), while PHEVs have the remaining 20%.
Looking at the remaining fuels, in September, HEVs clocked a 12% share, versus 8% a year ago, while petrol lost 13% market share(!), now at 34%, while diesel was down 10% in share, to just 18%, with the black fuel sales now sitting behind PHEVs.
At this pace, diesel will be död in Sweden by 2022...

Looking at last month Best Sellers, if Volvo secured another monthly win, this with the S/V60 PHEV twins, the Tesla Model 3 almost stole the prize, just losing the #1 by 8 units, but this performance allowed the sports sedan to be #7 in the overall market and it was still the Best Selling BEV on the market, something that will start to be a coveted award, especially by the hot new Polestar 2, 4th last month, with 582 units, and VW ID.3, that landed right in #5, with 460 deliveries.
A mention also to the #6 spot of the Toyota RAV4 PHEV last month, with 412 deliveries, so expect it to reach the Top 5 soon, and then to become a familiar face among the best sellers.
Looking at the 2020 ranking, the big news in the top positions is the Volvo XC60 PHEV climbing to the 2nd place, switching places with the VW Passat GTE, now making a 1-2 lead for Volvo, while the VW midsizer deliveries flow seems to be slowly dropping. Blame it on increased competition?

The #6 Tesla Model 3 closed in on the #5 Kia Optima PHEV, while the remaining position change was between Volvos, with the new #10 now in the hands of the compact XC40 PHEV, that has surpassed the S/V90 PHEV twins.
On the second half of the table we have the Renault Zoe climbing to #12, while both the #15 Hyundai Kona EV and the #16 Nissan Leaf surpassed the Skoda Superb PHEV, that seems to be suffering from the same slow decline of its VW Passat GTE cousin.

But the ranking changes didn't ended there, as the Polestar 2 joined the table in #19, just behind the #18 BMW 330e, that has seen its sales grow recently, thanks to the volume deliveries of the Touring (aka station wagon) version, allowing BMW's midsizer to score 201 units last month, a new year best.

Outside the Top 20, besides the aforementioned great performances of the Toyota RAV4 PHEV and VW ID.3, that will surely erupt in the Top 20 soon, we should mention also the ramp up of Mercedes, with two models (A250e - 176 units; GLC300e/de - 141) scoring record deliveries, while their Premium rivals BMW (X1 PHEV - 174 units; 530e - 133) and Audi (A6 PHEV - 122 units; Q5 PHEV - 139) are doing the same to their own plugin hybrids, as this technology is fast becoming the immediate successor to their diesel production.
Interestingly, if the Tesla Model 3 deliveries were something of a disappointment, with no four-digit score, the flagship models had their shining moment in September, with the Model S (189 deliveries) and Model X (115) having their best performances this year. Is there life for these two, after all?
In the manufacturers ranking, Volvo is in the lead, with 22% share (down 1%) and all the lineup on the Top 20, while Kia (18%, down 2%) keeps the 2nd place, and Volkswagen (12%) closes the podium, ahead of Tesla (7%, up 1%). 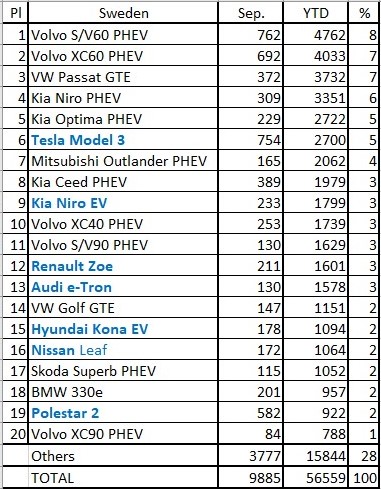 Midsize Cars
Nothing new on the top positions, with the Best Sellers holding their positions, but below the podium, the Tesla Model 3 dropped to #5, switching positions with the BMW 3-Series, but with only 27 units separating the #3 Kia Optima from the #5 Tesla Model 3, anything can happen between these three.

Looking at electrification rates, all ICE models have PHEV versions with variable shares, from the 100% of the Kia Optima, to 35% of the Volvo twins and the 35% of the BMW 3-Series (up 5% regarding 3 months ago), passing by the 59% of the VW Passat, so all in all, electrification is on the right track in this category.


Midsize SUVs
We have a fully electrified Top 5 in this category, with all models keeping their positions, with the Mercedes GLC electrification rate jumping to 30%, from virtually nothing 6 months ago.

This highlights the fast electrification rate that is also going on, with the Outlander (96% PHEV sales) being basically a plugin model, while the BMW X3 (60%, up 2% regarding last June) and Volvo XC60 (51%, up 12%) are increasing their PHEV take rate, with the same being said about the Audi Q5 (42%, up 13%).
Considering all this, it won't be surprising that soon all models on this Top 5 will have over 50% of units plugin capable.

Full size cars
While the flagship Volvos (24% coming from the PHEV version) ruling the category with an iron fist, below them, there are interesting developments, with the newly electrified (9% PHEV rate) Audi A6 supassing the BMW 5-Series and climbing the runner-up spot, with the big Beemer keeping its 27% electrification rate.
Elsewhere, the #4 Mercedes E-Class increased its PHEV take rate to 33%, a 4% increase over the last quarter.
With the Audi now delivering in volume its PHEV versions, this is now a fully electrified Top 5, signaling that no pure ICE models are present on these Top 5...Electrification, baby! Yeah!

Full size SUVs
One of the categories with best results regarding electrification, here the all-electric Audi e-Tron is the ruler of the category, ahead of the Volvo XC90, that has 81% of its sales coming from the PHEV version (up 24%), which is midway between the BMW X5 (72% PHEV) and the Porsche Cayenne (86%).
Finally, even the laggard Mercedes GLE increased its electrification rate, as the GLE350de now represents 6% of the model total sales, up 4%.
Published by José Pontes at October 06, 2020