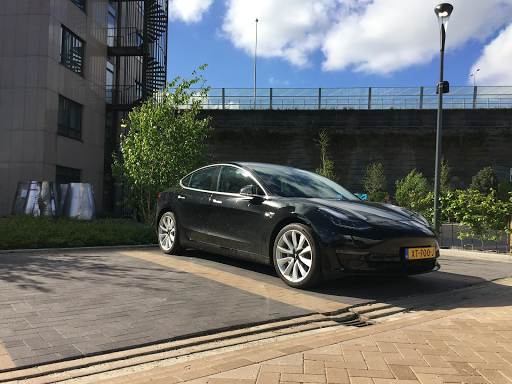 The Super-September edition of the Dutch EV market saw it return to red (-3% YoY), but with the crash of the overall market, the PEV market share actually jumped to 27%, 6 points ahead of September 2019, a time when we had no covid disruption a healthy automotive market saw plugins jump to 21% share, thanks to the (then) upcoming changes on the company car rules, that were set to start on January 1st, 2020.
Last month plugin share of 27% (21% BEV) pulled the 2020 PEV share to 16% (12% BEV), placing it finally above last year result (15%).
Interestingly, this time BEVs were the main driver of growth, being responsible for 79% of all plugin sales last month, well above the 74% yearly average, all thanks to the Tesla high tide, strong performances from Hyundai-Kia and the landing of hot, new BEVs...
As such, looking at last month sellers, we saw a (relatively) close race between the Kia Niro EV and the Tesla Model 3, with this last one winning the September trophy and reaching the 2th position in the overall ranking, but not all was lost to the Korean crossover, as the 749 registrations meant a new personal record.
But the highlight of the month came in 3rd, with the VW ID.3 scoring 609 deliveries in its first month (or should i say, "weeks") on the market, a whole letter of intentions, that will make it a strong contender for the 2021 Best Seller title.

Outside the podium, another hot new EV had its first full sales month, with the Polestar 2 reaching #4, with 478 units, while the #5 Hyundai Kona EV scored a Year Best result, with 397 registrations.
An interesting factoid regarding this Top 5, is the fact that all these BEVs have over 400 kms (250 mi) of WLTP electric range.
Looking at the 2020 ranking, the Tesla Model 3 has recovered the leadership from the Kia Niro EV, but with only 18 units separating them, this will be a race up until the last minute.
Elsewhere, first position changes happened in #8 and #9, with the Renault Zoe and Skoda Citigo EV (288 units, new PB) climbing one position, at the expense of the Nissan Leaf, that is now 10th, a few steps below the 5th spot it had 12 months ago.
The Volvo S/V60 PHEV twins jumped two positions, to #11, thanks to 182 units, their best result since January, with the Swedish brand now having a 1-2 leadership in the PHEV category.
On the second half of the table, the hot hatch Mini Cooper EV was up to #13, thanks to a record 223 registrations, while the PSA cousins Opel Corsa EV and Peugeot 208 EV continue climbing, with the German model jumping to #16, thanks to a record 314 registrations, and the French EV was up to #17.
We have a new face in the table, with the Volkswagen ID.3 shooting to #19 in tis landing month, while the Polestar 2 is now #21, with 511 registrations, 478 of them made last month, so expect the Sino-Swede to join the table soon, possibly replacing the #20 BMW X5 PHEV, which would leave just 4 plugin hybrid models in this Top 20.
Outside the Top 20, there isn't much to talk about, the Peugeot 2008 EV is ramping up deliveries, having registered 126 units in September, while the wacky strong personality Mazda MX-30 landed last month, with a strong result of 176 units, and expect the Japanese maker to continue pushing its crossover EV throughout the remaining months of the year, as Mazda needs desperately to comply with the EU CO2-emission rules, in order to avoid fines, so if anyone is interested in this peculiar model, expect some significant discounts towards the end of the year.
In the manufacturers ranking, Kia (14%) is in the leadership, followed by Tesla (12%, up 1%), while Volkswagen (10%) and Volvo (also 10%) are running for the Bronze medal.
The #5 Hyundai (8%, up 1%), is closing in to the podium, but has Opel (7%, up 1%) knocking at the door too, with the German brand now starting to justify PSA's bet in it. 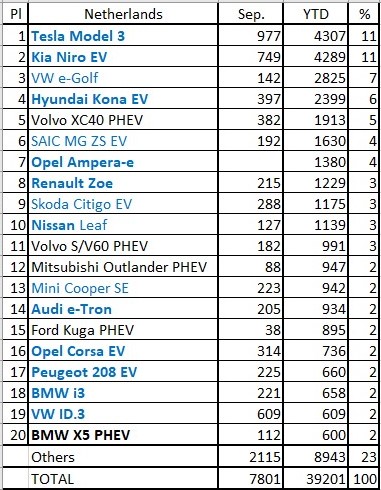 Midsize Cars
Tesla's midsizer is leading, followed by the electrified BMW 3-Series (14% PHEV units) and Volvo's S/V60 twins (35%, up 8% regarding the June report).

As for the remaining Top 5, the local Mercedes importer has started to deliver the C300e/de PHEV versions, but the PHEV versions only represent 5% of the midsize Mercedes, while the #5 Audi A4 doesn't even have any plugin version...

...But Audi's spot on this Top 5 could be in danger, as the hot Polestar 2 could steal its position in the coming months
Midsize SUVs
This category is running fast into electrification, from the all-electric Mercedes EQC in #5, to the almost all-PHEV Mitsubishi Outlander (96% PHEV units) in 2nd, passing by the #1 Volvo XC60 (33% PHEV, up 6%) or the #3 BMW X3 (33%, up 10%), and ending on the mildly pluggable Mercedes GLC (11% PHEV), in 4th.
With Mercedes now delivering PHEV units of its GLC midsize SUV, expect the three-pointed-star model to increase significantly its electrification rate.
Full size Cars
The leadership is in the hands of the BMW 5-Series, that has a low plugin share of its sales, at only 13%.

And while the others are even worse, things are slowly changing, as the #3 Mercedes E-Class has 11% (it was up 3% regarding the last report) of its sales coming from its PHEV versions, while the #2 S/V90 PHEVs have also 11% share (up 6%) of the big Swedes sales, and even the #4 Audi A6 has started to become electrified, with the big Audi now having 5% of its sales coming from their PHEV versions.
Another good news is the Porsche Taycan in the 5th spot, so we have one BEV model in every one of these Top 5's.
Full size SUVs
Unlike the full size car category, where ICE is still king, here on behemoth-land, electrification is much more advanced, not only the BEV Audi e-Tron rose to the leadership, but the #2 BMW X5 now has 67% of its sales coming from its PHEV version, up 7% regarding June's report, while the #3 Porsche Cayenne was the model that showed the most progress, with its electrification rate jumping from 24% three months ago, to the current 43%.
The #4 Volvo XC90 has an 88% electrification share (up 2%), while the #5 Range Rover Sport has 88% (up 1%) of all its sales also coming from the PHEV version.
Published by José Pontes at October 08, 2020