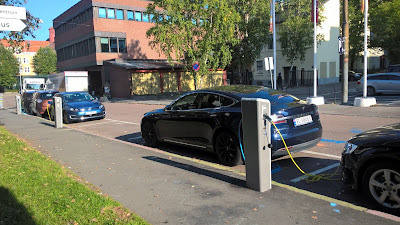 Having spent these last days in Oslo, i can assert that this is the place where the title of this tag of articles makes less sense, because EV's were...Everywhere.

Specialists have crowned Oslo as the EV Capital of the World, and rightly so, because the typical Tron-like zoom is already part of the sound-landscape of the city, sure, the diesel-clattering is more common still, but it was also relatively easy to find lines of two or three electric cars on the road.

But first things first, before getting to Oslo, one must leave the airport and travel between the local airport and the city itself, it is a 20 to 30 minutes trip on the highway, where one can see a major difference between the first kilometers, where electric cars were rarer and composed mainly by Tesla Model S, Nissan Leaf and VW e-Golf, and the final kilometers, closer to the urban toll, where EV's are not only more common and diverse, but you start to see the I-Miev triplets, among other small cars.

There i realized my first Oslo lesson... 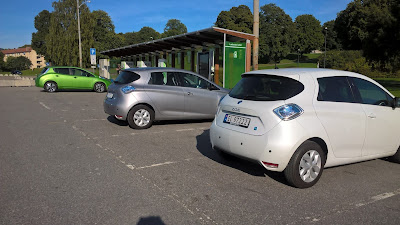 At 660.000 inhabitants, Oslo is not one of that large Metropolis with high rises and congested streets, here the vibe is more relaxed and the large amount of regular hybrids (More popular than plug-ins) and EV's zooming around just add to that feeling.

Plug-in owners might start to stress when they want to park and charge at the same time, while there are parking lots with multiple charging plugs, like the one pictured above, the city downtown hasn't got that many side way charging, and the places that had them, were always full.

This is probably an impossible equation to solve, but the city center, which was the only place where there was high vehicle density and stop-and-go traffic, there is little possibility to charge there.

Lesson Number Two - Charging is more needed where there is more traffic density.

Lesson Number Two B - Utility companies have a good opportunity here, paid charging at city centers are a guarantee of high rotation and continuous revenue. 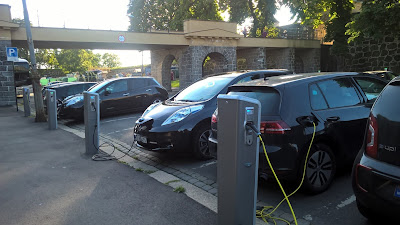 But for drivers that don't mind walking a few minutes, just outside the city center there are a number of parking lots with EVSE, with the most interesting of them being the one pictured above, close to the City Harbour, which has some 20 to 30 charging spots to charge, with the most interesting bit being the fact that ICE vehicles are not allowed to go into this parking lot.

At the time of the visit, in the middle of the afternoon, the parking was half full, which meant some 10/15 EV's charging at once in the same place and no gas car in sight...

Never like then i felt the EV future so close.

Email ThisBlogThis!Share to TwitterShare to FacebookShare to Pinterest
Labels: Looking for EV's, Norway