This month we see two important models landing, both at the crossroads of the main trends today: BEVs & SUVs, with BYD betting on its Song EV300 and SAIC on the Roewe eRX5 BEV.

On other news, the highly ambitious GAC launched not one, but two new models in June: The GA3 PHEV sedan and the GS4 Crossover PHEV. Oh, and Hawtai launched the EV160 city car. If anyone cares for that...

BYD Song EV300 - Hot on the heels of the PHEV success, BYD launched the BEV version of the Song SUV, with a 48 kWh battery, 300 kms range and 0-100 kms/h in 8.9 secs, thus mimicking the Qin EV300 specs, but on a higher, more practical body. With the PHEV version now selling over 4.000 units/month, the 189 deliveries seem like an underwhelming performance, but i believe in a few months it will be selling at the same pace of the Song PHEV. 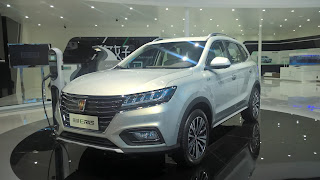 SAIC Roewe eRX5 BEV - SAIC's Anti-BYD Song, after launching the PHEV, Roewe now released the BEV version of its RX5 SUV, ready to fight the Song EV300 with an equally impressive 48 kWh battery, so expect it to reach easily the four digit area, another question will be if it can do what has been made to do: Outsell BYD's arch-rival ...