The PEV Fever has definitely caught on in Germany, with April signaling 5,700 registrations, a 61% increase YoY, with the PEV Share climbing to 2.2%.

But more important than the Plug-in niche, are the seismic changes happening in the fuels mix of the mainstream market: Diesel sales continue to sink (-13%) YoY, to the benefit of all other fuels, regular gasoline-powered cars are up 19%, while alternative fuels are jumping ahead, with the highlights being CNG, up five-fold, and BEVs (+124%), but HEVs (+70%) have also grown significantly, just like PHEVs (+21%), hell, even LPG (+11%) had reasons to smile about, leaving diesel  as the sole loser, with a market share of only 33%, far, far from regular gasoline cars (62%). At this pace, Diesel sales will be dead in das diesel Vaterland by 2021-22...Would someone imagine this four years ago?

Back at Plug-in sales, count with the German PEV market to always deliver surprises, and April was no exception, the Best Selling model last month was the Kia Soul EV (721 units), even if most units end up in Norway (It wouldn't be the first time), this was the best performance for the Kia in 28 months. The Korean was followed by three other BEVs, while in Fifth Place we have another weird surprise, with the Mercedes E350e, registering its third consecutive record performance, with 316 units(!) in April. It seems local taxi drivers are getting into (PH)EVs...

In a traditionally fragmented market, where the leader has only 8% share, the race for #1 now has five models  separated for only 300 units, if the current leader Smart Fortwo ED continues losing precious ground to its followers, the Kia Soul EV was the one that had more reasons to be happy, not only recovered significant ground regarding the leadership, but also managed to surpass the BMW i3 and reach Fourth Place.

April had plenty of changes, along with the aforementioned Kia Soul EV, the VW PHEVs had a great month, with the  #6 Golf GTE and the #7 Passat GTE both jumping two places, with the Golf PHEV becoming the new Best Selling PHEV.

The Mercedes E350e also rose two positions, to Tenth, becoming the Best Selling Premium model on the ranking, well ahead of its direct competitor, the BMW 530e, that nevertheless, also had a brilliant month, delivering a record 152 units and allowing it to climb two positions, into #17.

But the model with the highest climb in the ranking was the new Nissan Leaf, leaping 5 positions into #13, with a Top 10 position not that far in the horizon.

On the other hand, last year Best Seller, the Audi A3 e-Tron, despite having climbed two positions in April, it is still in #18, having seen its sales sink 67%(!) YoY. That's how dynamic this market is...

Speaking of a dynamic market, things are quite different for the automaker in 2018, currently the Model S is only #16, far from the Eighth spot it got last year, and even farther than the #5 of 2016, still its highest standing in Germany. Having scored 544 deliveries in 2018, sales are now down 35% regarding the same period of 2017, possibly due to the Model 3 long shadow. As for the Model X, deliveries are even worse, with 227 units so far,  registrations are down 40% YoY. Are the upcoming German BEV SUVs (Audi e-Tron, Mercedes EQ C...) damaging Tesla's demand? One thing is certain, Tesla needs to do something here, especially considering that this market is on the fast lane (+70% in 2018), having already surpassed Norway as the largest PEV market in Europe.

In the manufacturers ranking, Volkswagen is stable in the leadership, with 19% share, while last year winner BMW is in Second Place, with 16% share, and Third Placed Smart (13%, down 2%) is losing steam charge and watching its immediate competitors (Kia and Mercedes, both with 11%) getting closer.

Regarding the BEV/PHEV share, BEVs are slowly, but surely, winning an edge over PHEVs, in April all-electric vehicles had 54% of all Plug-in sales, pulling their YTD lead up to 52%. 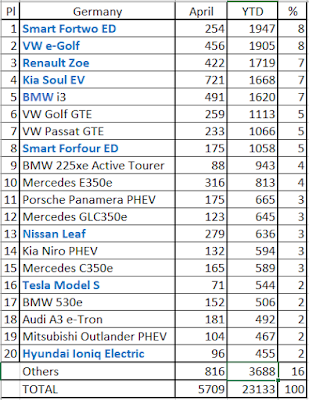 Unlike the PEV market, always filled with surprises, the regular Hybrid market is owned by Toyota, collecting the Top 4 positions, with the Best Selling Plug-in being only Fifth, 500 units behind the leader Yaris Hybrid.
Published by José Pontes at May 16, 2018