Tesla Model 3 lands with a bang

The French PEV passenger car market registered 4,178 registrations in February, up 32% YoY, with all-electric models growing faster than PHEVs (+46% vs +16%), a big portion of this growth came from the landing of the Tesla Model 3, with 401 deliveries last month, but even discounting the "Model 3 effect", BEVs grew 26%, a positive sign that the Model 3 isn't stealing sales from other BEVs, but from its ICE direct competitors.

Also, most people in Europe would not switch from a 35k € Leaf for a 60k € Model 3...and even the demographics that buy the expensive BMW i3 would not dump it for a Tesla...They would instead buy both, one for the city/commutes, the other for the weekend trips.

Looking at last month Best Sellers, the Renault Zoe sales surge seems to have plateaued (+4%), with 1,197 units in February (#38 in the mainstream market), while the main reason for BEVs to shine came in 2nd place, with the Tesla Model 3 landing with 401 units, if those not familiar with this market might feel this is not a disruptive result, after all the Californian remained far from the leader Zoe, this event in France is like the Audi e-Tron landing in the US market straight in the runner-up spot. Amazing and unlikely, right? Right. That's how big this is.

Elsewhere, the usual silver medalist Nissan Leaf this time had to be contented with the last place of the podium, with 326 units, while the Volvo XC60 PHEV had its second record month in a row(!), by registering 284 units, confirming its status as the preferred PHEV beyond French borders.

Another interesting event was the Kia Niro EV reaching the 5th spot in February, thanks to a record 253 deliveries, confirming the popularity of this model throughout Europe. If only Kia had enough batteries to satisfy demand...

In a market known for its stability, this time there were a number of changes in the top positions, with the Volvo XC60 PHEV climbing two positions and reaching the podium, in 3rd, while another popular PHEV, the Mitsubishi Outlander PHEV, was also up, to #5.

The Tesla Model 3 landed in #7, and is set to reach the runner-up spot in the next couple of months, while another recent long range BEV, the Kia Niro EV, was up to #6.

Confirming Kia's good moment, the Niro PHEV jumped 4 spots, to #14, while the local Hyundai importer, is lagging behind, as the Best Selling Hyundai, the Kona EV, is only #11. 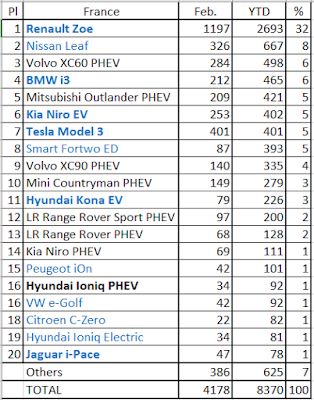 
One of the question marks around the Model 3 in Europe, regarded the impact that it was going to make on this side of the Atlantic, will it disrupt the PEV and ICE sedan market in the same way that it is doing in the US, or will it be more subdued, because it is playing away from home?
The answer is now starting to be written, comparing the Model 3 French deliveries in its first month on the market, against its most direct competitors, we can see that the Californian still has a lot of room to grow, so one can imagine the Tesla midsizer reaching some 800 units/month, once the SR version(s) arrive.
Published by José Pontes at March 11, 2019