After a great January, the German PEV passenger car market continued on the right track in February, up 24% to 6,618 registrations, with BEVs continuing to increase its share (70%, +1%) against PHEVs.

Looking at February Best Sellers, the Tesla Model 3 landed with a bang (where have i heard this before?), by delivering 959 units and jumping straight into the leadership, displacing  the usual leader Renault Zoe, that registered 782 units.

The BMW i3 was 3rd, thanks to a near-record performance of 694 deliveries, while behind it we have the solid-as-cement Mitsubishi Outlander PHEV, that registered 544 units, the SUV best result ever(!) in its 5 year career in this market.

But the surprise of the month was the Hyundai Kona EV reaching the 5th Spot, that with 400 deliveries, broke its personal best for the 4th(!) consecutive month. Will we see it more often here? You bet you will...

The German PEV market is known for close races and constant changes, and last month was no exception, first of all, the BMW i3 rose to #2, benefitting from the dysmal performance of the VW e-Golf, that with only 281 units, it had its worst result in the last 6 months...Is the German hatchback already feeling the heat coming from the Tesla Model 3 and remaining long range BEVs?

Speaking about the Tesla midsizer, the Californian jumped to #4, and is now going after the podium bearers, while the Nissan Leaf climbed to #7, apparently the 40kWh version of the Nissan EV still has enough juice in it to keep it in the Top 10, the question is, for how long?

The BMW 225xe A.Tourer recovered from a terrible January and registered 335 units in February, allowing it to jump back into the Top 10, in #9.

Outside the Top 20, we should mention the record 92 deliveries of the Jaguar i-Pace and the 58 registrations of the Land Rover Range Rover Sport PHEV, two nameplates that have been slowly, but steadily, ramping up sales and could be a Top 20 presence soon.

Will we see Tesla reach the brands podium next month? 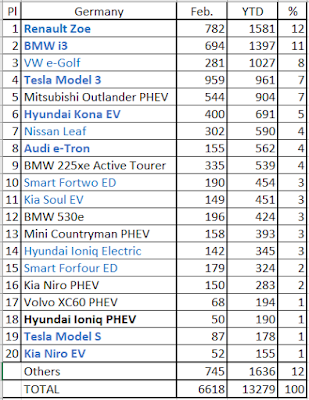 The answer is now starting to be written, comparing the Model 3 deliveries in its first month on the market, against its midsize premium competitors, we can see that the local heroes are still significantly ahead, although the Audi A5 is already seeing the Tesla in the rear view mirror...

Also interesting is to see that while the Audi's and the BMW model sales are stagnating, at best, the Mercedes C-Class is up 9% YoY, so it seems Mercedes customers are more immune to the Tesla fever than others.
Published by José Pontes at March 15, 2019