Despite the PHEV slump (-28%), BEVs (+105%) pushed plugins upwards (+30%) in February, to 5.889 units, leading to large BEV (41%) and PEV (53%) shares, but the really interesting news should happen next month, with the Tesla Model 3 deliveries going through the roof in March, expect an outlandish market share in the last month of the quarter (do i hear over 80% market share?), mostly thanks to the current Tesla Tide.

In this context, we should see Norway get some 70% PEV share this year, with peak months possibly reaching 90%.

The fuels mix is showing BEVs well above everyone else (41%), while every other fuel (gasoline, diesel, PHEVs and HEVs) are suffering two-digit sales drops. So, this is what disruption looks like...

Looking at last month Top Sellers, one can say that the Tesla Model 3 started its reign as King of Norway, winning its first Best Seller of the Month award, with 791 units, being followed by the #2 VW e-Golf and the #3 Mitsubishi Outlander PHEV, that had 550 deliveries, and is currently the only plug-in hybrid selling in significant volumes. Maybe because it is one of the few PHEVs that does not have a strong direct competitor on the BEV field?

(But beware Mitsubishi, the Tesla Model Y is coming...So hurry up with the BEV Outlander, Mitsu)

Outside the podium, there were plenty of BEV "Young Turks" shining, with the two most relevant being the Hyundai Kona EV (414 units, new personal best) and the Jaguar i-Pace (391). 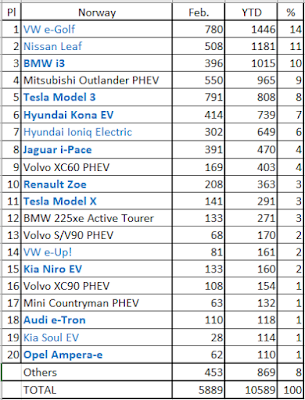 Looking at the 2019 ranking, we have a new leader, with the VW e-Golf removing the Nissan Leaf from #1, although the German hatchback won't have the time to savour it for a long time, as the Tesla Model 3 tsunami will steal the Top Dog spot for the reamining of the year.

Elsewhere, a new wave of BEVs are stealing the show, besides the the soon-to-be-leader Tesla Model 3 shooting to #5, the Jaguar i-Pace jumped 6 spots to #8, while the Kia Niro EV joined the Top 20, in #15, and the Audi e-Tron did the same, in #18.

In the midst of the BEV takeover, one of the few PHEVs to escape the doom and gloom of its category was the Volvo XC90 PHEV, that was up three positions, to #19, thanks to 108 registrations. How do people say? The exception...

Interestingly, the 3 new additions to the ranking in February (Model 3, Niro EV and e-Tron), were all long range BEVs, which says a lot on where the market is going…

Looking at the manufacturers ranking, Volkswagen is the new leader (16%, down 1%), now being followed by the previous leader BMW (15%, down 3%), while Tesla (12%) is rapidly getting closer to the front of the race, as is prepares to run away from anyone else next month.

I guess only Volkswagen will have a shot at displacing Tesla from the lead in the future, but only in 2020, and assuming the ID hatchback production ramp up goes smoothly.

Hard times for the competition… 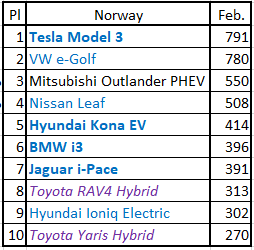 With the PEV share at 53%, the plug-in market continues to merge with the mainstream, breaking down sales by fuel source, we have 7 BEVs in the Top 10, followed by only 1 PHEV (Mitsu Outlander PHEV, in #3), and 2 HEVs (Toyota's RAV4 and Yaris), but the telling story is that the Best Selling HEV was only #8.

Off-topic, Volkswagen, when will we see the Tiguan GTE land in European shores, and when will the T-Roc have a GTE version?

And now a warning for other brands with no short term plugin plans: The Top 7 PEV models were also each brands mainstream Best Seller in Norway, which is like saying: "Go PEV, or go home"