Audi e-Tron starts in the lead
PEV Sales were up a solid 31% in January, to 6.155 units, with both powertrains improving their market share, with BEVs growing from 38% a year ago to the current 44%, while PHEVs went up from 14%, to the current 20%, so things are looking good, leading to a large PEV (64%) share, and if we include HEVs to the tally, we have 79% of the Norwegian market now electrified (versus 64% a year ago), and this is in a off-peak month for the Tesla Model 3, so numbers could be even more outlandish in March, possibly even reaching 80% plugin share!

In this context, i'm wondering if Norway will get any 90% PEV share month, towards the end of the year... 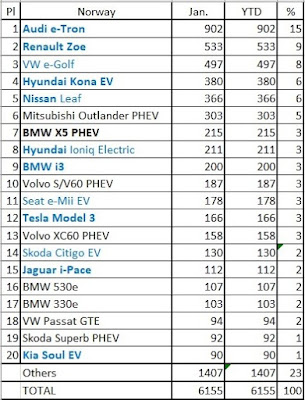 Looking at the January ranking, there are significant news on top, with the Audi e-Tron starting 2020 in the lead, being the second time the Big Audi wins a monthly title (the first had been last October), thanks to a record 902 registrations, with the German Crossover almost doubling the number of registrations of the runner-up Renualt Zoe, itself a surprising Silver Medalist, with a record 533 units, being only the third time the French hatchback reached the podium in Norway (the other two had been in June '17 and January '18), and its first Silver Medal, after two Bronzes.

The VW e-Golf ended the month in 3rd, so it seems the veteran model will leave the market on a high note, despite its superior sucessor, the VW ID.3, being just a few months away from landing.
Interestingly, all the Top 5 spots belong to BEVs, which says a lot on where the market is going...

Elsewhere, the Mitsubishi Outlander PHEV is now seeing its lead on the plugin hybrid field being threatened by the new BMW X5 PHEV, that is less than 100 units away from the Japanese SUV.

The German SUV is experiencing a strong demand, which proves that the formula "bigger battery = bigger sales" is also true on the PHEV field, and with its arch rival Mercedes GLE350de still in "demo mode", the Bimmer is profiting to reach record highs.

It seems Mercedes is deep in "Battery Hell", not only the new GLE plugin hybrid is stuck in symbolic outputs, but the all-electric EQC (remember it?) is far from being delivered in volume amounts, in January the midsize SUV hit a record...67 deliveries. And let's not even mention the ever delayed Mercedes A & B-Class PHEVs...

A mention to the record 107 deliveries of the BMW 530e, allowing it a Top 20 spot, in #16, now with a (slightly) bigger battery and AWD now available as an option, the BMW's sedan is now the leader in its category.

The Kia Soul EV closes the Top 20, with 90 registrations, its best performance since 2018, so it seems Kia has now enough batteries to supply the small crossover in larger volumes.

Finally, we have three new faces on the Top 20, the Skoda Superb PHEV was #19, with 92 units, and the small Seat e-Mii and Skoda Citigo EV landing inside the Top 20, if we add all registrations of the VW city triplets (VW e-Up!, Seat e-Mii EV and Skoda Citigo, we get 348 units, which would place it in #6 in the ranking, not bad for a city car, right? 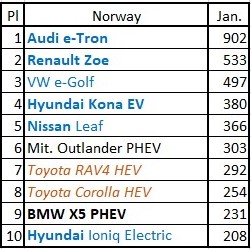 The plug-in market continues to merge with the mainstream, breaking down sales by fuel source, we have five BEVs in the Top 5, followed a balanced mix of plugins, with 1 BEV, 2 PHEVs and two HEVs, but the telling story is that the Best Selling HEV (Toyota RAV4) was only #7, with the other Top 10 hybrid (Toyota Corolla) ending behind it.

But i guess that for a regular 100% pluggable Top 10, we will have to wait for the PHEV version of the Toyota RAV4, as the Crossover Toyota is one of Norway's darlings and will be hard to keep it outside this Top 10...