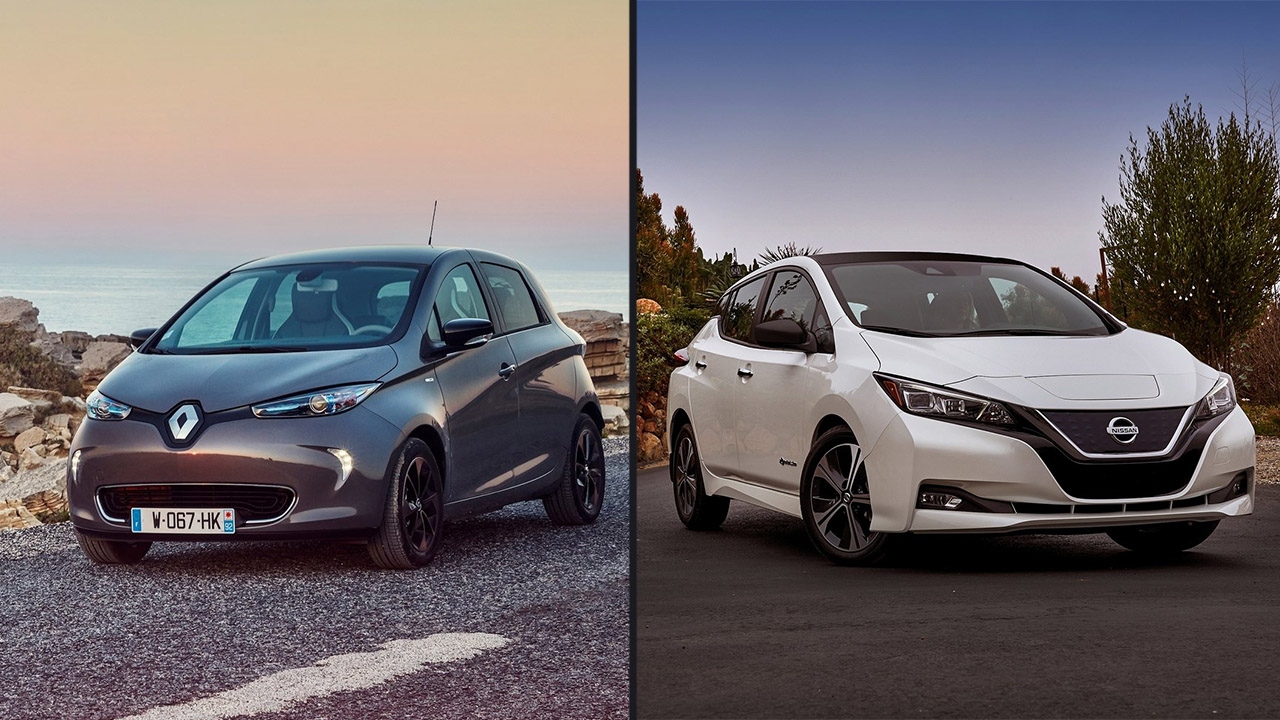 
But if overall, the numbers seem to point to 2018 as more a year of Evolution, instead of Revolution, separating the BEV/PHEV powertrains, there are seismic changes, as this year the European market started to get off the PHEV drug, as we can see on the breakdown between both technologies, with all-electrics owning 66% of sales in December vs 51% in the whole year, which in turn, it was the first time since 2014 that BEVs outsold PHEVs on a yearly basis.


What happened for this change to happen? While the introduction of new, longer range BEVs (Jaguar i-Pace, Hyundai Kona EV…), and the production ramp up of popular models (Nissan, Leaf, Renault Zoe, Hyundai Ioniq EV…) surely have helped, the major reason for it was the fall from grace of plugin-hybrids, at the hands of the new, and more demanding, WLTP emissions standard, that was put into practice in the second half of the year, originating even the production stop of popular models, like the VW Passat GTE, or its Golf GTE sibling.


And the growth rates of both technologies translate the different realities, with BEVs prospering in 2018 (+48%), to close to 200,000 units, with December (+70%) precluding even faster growth rates for 2019, as the market hit its second record month in a row in the last month of the year, with 26,000 units, while on the other hand, PHEVs grew 20% in 2018, but all thanks to the pre-WLTP sales rush, as every month since then has seen shrinking sales, with December registering a steep 20% drop, the largest since 2016,


Will PHEVs in Europe recover sometime in the future, or are they going to be swallowed by the upcoming BEV flood?


One thing is certain, BEVs start 2019 with the upper hand.


In December, the top spots had some changes, although none of the new faces (Jaguar i-Pace and Tesla Model S) are not really a surprise, as both benefitted from the sales peak in The Netherlands, and the Tesla is a regular here, thanks to the usual last-month-of-quarter peaks.


The Renault Zoe ended the year with another Monthly Best Seller trophy and yet another record score (how high will it go?), while the remaining podium places went for the Nissan Leaf and the evergreen Outlander PHEV.

#1 Renault Zoe – The record 5,382 deliveries meant a 67% jump YoY for the French hatchback, this positive score is the result of LG providing more batteries to the French carmaker, thanks to the ramp up of its European factory. Without the batteries bottleneck, we should finally see the real demand for the Zoe. Regarding individual market performances, the domestic market did the usual heavy lifting, by registering 2,558 units (+55% YoY), with other significant numbers coming from Germany (944 units), Norway (327), and Sweden (340 units, new record), making the Zoe a hot selling model, mostly thanks to its unbeatable price vs range ratio.

#2 Nissan Leaf – Despite once again being surpassed by its French cousin Renault Zoe, the Nissan Leaf continues to expand its sales, by registering 3,604 units. Looking in more detail at last month performance, the main market was, as usual, Norway (719 deliveries), with France with 447 units, and Sweden (343), following it, while in Spain (204 units), the Japanese hatchback had its second record month in a row. Will this sales surge have some meaning in the future? #Brexit, #Barcelona?

#3 Mitsubishi Outlander PHEV – Europe’s favorite family/towing/winter plugin continues to profit from the specs update (and lack of direct competition), with the Japanese SUV securing yet another Best-Selling PHEV of the Month award and a podium presence in December, thanks to 3,023 registrations, up 60%. The plug-in SUV will continue to offer its unique mix of usable electric range, “affordable” space, AWD and utility keeping it popular in markets like the UK, Norway or Sweden.

#4 Jaguar i-Pace – We have a fresh face in the Top 5, and a beautiful one, I might add, with the Jaguar i-Pace benefitting from the production ramp up and the sales rush in The Netherlands, to reach a 4th spot in Europe, thanks to 2,983 deliveries, a new record that should prove to be difficult to beat in the near future (or maybe not, please Jaguar, prove me wrong!). Interestingly, The Netherlands didn’t take all of the i-Pace production, as some crumbs were left for markets like Norway (165 units) and the UK (105), what might already prelude the larger markets in 2019 for Jaguar’s innovative Sports-Crossover Hatchback-Thingy, or, as it is now known among certain Jaguar dealerships: The Money-Making Machine.


#5 Tesla Model S – In a time when it’s all “bla, bla, bla, Tesla Model 3, bla, bla, bla”, the old geezer Model S still showed it had a few tricks up its sleeve, thanks to 2,931 units being delivered, its best result in 3 years. Sure, most of it (1,558 units, to be more precise), came from the sales rush in The Netherlands, but numbers were also significant in Norway (600 units) and the UK (230), so the question lies: Is this the swan song for the Model S in Europe, or is there still any life in it, once the newer, cheaper, Model 3 lands?


Looking at the 2018 ranking, there were a few last minute changes in December, if the top positions remained stable, we start to see some movements in #9, with the Tesla Model X benefitting from the last-month-of-quarter peak to jump two positions, while both the Kia Niro PHEV and Hyundai Ioniq Electric climbed one position, to #13 and #14, respectively, highlighting one of the most recent trends in the ranking: The rise of Korean models.


BMW also had reasons to smile about, with the i3 and the 530e hitting record performances, with the hot hatch delivering 2,536 units, while the sedan registered 2,022. The BMW i3 performance is particularly interesting, as it is a car that has been on the market since 2013, with no major changes, apart from the battery size, which proves once again the formula: Bigger battery = Higher sales.


Looking at the 2018 podium, we can see that the Nissan Leaf managed to keep the lead over the Renault Zoe and win the Best Seller title, but I suspect that if the year had 13 months, the French hatchback would be able to steal the trophy from the Nissan model…Nevertheless, congrats to the Japanese hatchback, winning its first European title since 2013.


The BMW i3 took the Bronze Medal, but its expanding sales (+17% YoY) almost weren’t enough to keep its place in the podium, as the currently faster-selling Mitsubishi Outlander PHEV ended just 500 units behind. This could have been another case of: “If the year had 13 months…”


Looking at some sub-categories winners, the Mitsubishi Outlander PHEV was once again the Best Selling plugin-hybrid, taking also the #1 SUV trophy, both Teslas took the Best Selling large car/SUV titles, although the BMW 530e wasn’t that far from the Model S, so the 2019 title edition might change hands, the Renault Zoe was the #1 Small EV and finally, the BMW 225xe A. Tourer took the Best Selling MPV title (well, it helps that it doesn’t have any real competition, right?), where are the electric Renault Scenic’s? Or the Citroen C4 Picasso’s whatever it’s called these days?


Usually, this is a Top 20, but this time i included the #21 Jaguar i-Pace in the tally, the distance was so small regarding the #20 and its significance so big, that I made an exception, allowing you to see here Jaguar’s Money-Maker. A sure presence in the 2019 Top 20, the question will be: How high? Top 10?


Outside the Top 20 21 ranking, a reference to two just landed long-range Crossover BEVs, a type that promises to be the new trend for 2019, the Audi e-Tron delivered close to 700 units in December, while the Kia Niro EV, or e-Niro, delivered over 300 units, no doubt still demonstration units, which should mean that both models should be Top 20 presences and candidates for a Top 10 spot.


The Hyundai Kona EV is (finally!) ramping up deliveries, crossing for the first time into the four-digits, with 1,022 deliveries, as it prepares to satisfy a 10,000-something long waiting list.


Looking into 2019, if the Best Seller title seems to be already reserved for the upcoming Tesla Model 3, with some 120,000 deliveries, with the Nissan Leaf and Renault Zoe running for Silver at around 80,000 units each, the interesting thing will be to find who will be in the remaining 7 positions of the Top 10, as there will be lots of new incumbents, trying to displace the current holders, so by alphabetical order, here are the contestants: Audi e-Tron, Hyundai Kona BEV, Hyundai Ioniq Electric, Jaguar i-Pace, Kia Niro EV and Mercedes EQC. 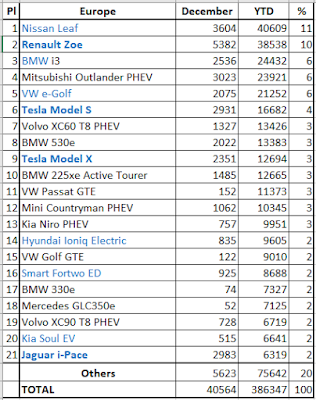