December had 6,232 plugin registrations, a four-fold increase regarding the same month last year and the market best month since December '16, which translates into a strospheric 31% PEV Share in December, pulling the 2018 PEV share to 6%, a great result, especially when we realise that BEVs represented 89% of registrations in 2018, and 98% in December alone.


Of course, the higher taxation of expensive BEVs in 2019 is the major reason for this surge, but something tells me (ahem, Tesla Model 3...) that this exponential growth is set to continue through 2019.

This good market performance was the result of three exceptional individual results, starting with the Best Seller of the Month, the Jaguar i-Pace, that delivered 2,621 units, not only a new all-time record for a BEV, but also the first time that a 100% electric vehicle became the Best Selling nameplate in the mainstream market.

The Tesla Model S also shined, scoring 1,558 units, while its Model X sibling won the last place of the podium, with 652 deliveries, with both Teslas establishing new record highs.

Interestingly, these three models all showed up on the top spots of the December mainstream market, besides the aforementioned win from the Jaguar i-Pace, the Model S was #2 in December, while the Model X was #5, thus making 3 BEVs in the mainstream Top 5. How long will it take the yearly ranking to look like this?

But there were others beyond the podium bearers to shine, the BMW i3 had its best month in its 5 year career, by delivering 272 units (all BEV), proving once again the formula: "+ range = + sales" .

Just outside the Top 5, there was one significant performance, with the #7 Hyundai Kona EV delivering 152 units, let's hope the Korean maker can find enough batteries to satisfy the overwhelming demand for its electric Crossover, there is a rumour circuling around that Hyundai has already 120,000 orders for it globally...I doubt that it could be true, but even if it is half of that, it is still a giant headache for the Korean head honchos ("Where are we gonna find 60,000 batteries for the Kona?!? Wheeere????").

Looking at the 2018 ranking, the big news is the Jaguar i-Pace 6 positions jump to 2nd Spot, preventing Tesla from making a 1-3 podium win.

Nevertheless, the Tesla Model S was the 2018 Best Selling PEV, with over 5,600 deliveries, winning its second (and last - because Model 3) title in a row, with the Nissan Leaf ending the year in 3rd, its first podium since...2011.

Is the "model they love to hate, back to shut them up?" - as the Brazilian rapper "Gabriel o Pensador" says in one of his songs? I guess we will find out in 2019, once the 60 kWh version lands...

Outside the podium, the Mitsubishi Outlander PHEV was the Best Selling PHEV, its first title since 2015, when it was that year Best Selling PEV.

The BMW i3 was the Best Selling Small Car, in #6, outselling once again its rival Renault Zoe, that ended in #8.

As for the #11 Hyundai Kona EV, a lot is expected in 2019, so a Top 5 should be easy to earn, and assuming there's enough batteries, it could even have a go at the medal positions of the Nissan Leaf and BMW i3.

A reference to the Audi e-Tron joining the ranking in #15, thanks to its first 163 deliveries, which makes us wonder how high would it reach, if it hadn't experienced production delays...

Outside the Top 20, a mention to the (slow) deliveries ramp up of the Kia Niro EV (aka, e-Niro), that has delivered 40 units last month, with the Korean looking for a possible Top 10 presence in 2019.

Finally, a reference to the 2019 Best Seller, the Tesla Model 3. How high will it go? My bet will be around 14,000 units, making it not only a strong candidate for the #1 spot in the local mainstream market, but also one of the two top markets, volume-wise, for the Tesla midsizer in Europe, with the other big market being Norway, where a "Model 3 mania" is sure to happen this year.

In the manufacturers ranking, Tesla (33%, up 2%) won its 2nd consecutive title, with Jaguar (13%) winning the Silver medal at the last minute, overrunning Nissan (12%), that dropped to 3rd.

In the LCV category (+91% YoY, with some 1,000 units), after the 2017 win, the StreetScooter vans took once again the Best Seller title, leaving the competition in the dust, with the German vans being responsible for half of the registrations. 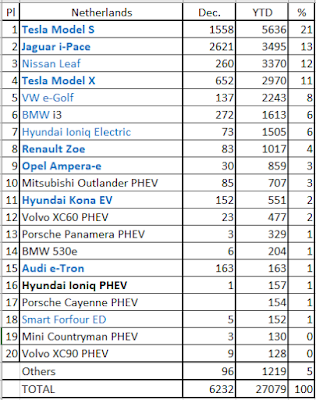