After a 3 months streak of record-breaking months, plugins in December just kept on pushing forward, by registering over 180,000 units, making it the 4th record month in a row(!), growing 70% YoY, with the 2018 sales ending north of the 1 million units mark. In one year. And to think that 2017 was the first year that plugins reached 1 million sales, GLOBALLY. Woah.


With all this continued growth, and the recent decline of the mainstream market (-16% in December), the PEV share hit yet another all-time best, ending the month with 8% share, while the 2018 share ended at a record 4.2% share, double the share of 2017 (2.1%), with sales expected to continue growing fast throughout 2019, in a year we should be talking about 8% in 2019, and some 15% in December…Amazing isn’t it?


Of this (small) cake, 2% belong to BMW, the Best-Selling foreign brand, 1% to Tesla and 1% to Nissan, with the remaining manufacturers sharing the final 2%.


In December, the headlining news was the BAIC EU-Series becoming the Best Seller of the Month, with an amazing 12,561 units, being only the second model to surpass 10,000 units in one month in China, after its smaller sibling EC-Series having opened the gates last year.

#1 – BAIC EU-Series: Beijing Auto’s electric sedan has been evolving throughout the years and now, thanks to a modern design and some solid specs (215 hp; 420 kms / 260 mi NEDC range; $32,500), it is finally making an impact on the Chinese plug-in market, having registered a record 12,561 units last month, almost as much as it sold during the whole 2017 year. It seems BAIC found a second Best Seller in its stable, question is how it will deal with it, will it give priority to the most expensive and profitable EU-Series over the EC-Series? 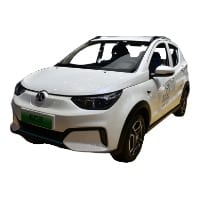 #2 – BAIC EC-Series: After the record 20,648 units of October, BAIC’s small EV returned has been dropping the number of registrations, with only 8,407 units being registered in the last month of the year, losing the #1 position in December to its sedan sibling EU-Series. Considering the EC-Series still has a waiting list, it seems the maker is prioritizing the sedan production over its smaller EV. The revised design and improved specs (new 30 kWh battery) will allow the EC-Series to remain a popular choice in the Chinese Mega-Cities, also helped by a competitive price ($25,000, before subsidies).

#3 – BYD e5: BYD’s bread and butter electric sedan, continues to profit from the recent redesign, having registered a record 8,234 units in December, thanks to an attractive design (finally!) and strong specs (61 kWh, 405 kms / 252 mi range NEDC), for a competitive price (USD 32,500). Expect this model to continue shining in 2019, now that the Qin has become a more upscale model, leaving more space between both.

#4 – BYD Yuan EV: We all knew that BYD’s new Baby Crossover was destined for success, and with a record 8,021 deliveries in December, BYD’s new baby is living up to expectations. Will the Yuan be the fiercest competitor in 2019 to the all-conquering BAIC EC-Series? With a thousands-long waiting list, demand is no problem, I guess it will depend more on BYD’s ability/willingness to make them in large volumes (The Tang/Song/Qin are more profitable…), than actual demand, sitting on a sparsely populated part of the market (small BEV crossovers), and with unrivalled specs (42 kWh battery, 305 kms/190 mi NEDC range, 174 hp motor), and price (25,000 USD), BYD might have found in this new model its star player, crowning what it is already a strong lineup.

#5 – BAIC EX-Series: The third musketeer of BAIC’s latest generation of star players, the EX-Series Crossover registered a record 6,844 registrations in December. Sales should continue strong for BAIC’s model, possibly becoming the third model in the brand lineup to cross the 10,000 units/month mark. As for the EX Series specs, the battery has 62 kWh, originating an interesting 415 kms (259 mi) NEDC range, while on the power department, there’s a decent 215 hp to pull it, all for $41,000.


If the 2018 winner wasn’t surprising, with the BAIC EC-Series winning its Second Models trophy with months in advance, below it there were plenty of models shakin’n shining, the biggest of all being the BAIC EU-Series shooting seven spots to…#7, thanks to the aforementioned 12,561 units, with another hot model joining the Top 10 in the last month of the year, as the BYD Yuan EV jumped two positions, to #9, making 5(!) BYD’s in the Top 10. Talk about a strong lineup…


Below the Top 10, there were also some significant changes in the ranking, with the BAIC EX-Series climbing to #11, while the SAIC Baojun E100 was up one spot, to #16, and the Dongfeng Junfeng Skio reached #18, thus jumping two positions.


In such a fast-growing market, it has become the norm that models break their all-time highs all the time, as of this Top 20 ranking, 8 have beaten their personal best last month, 5 of them either belonging to BYD or BAIC.


Outside the Top 20, there’s much to talk about, the BMW 530e ended the year as the Best-Selling Foreign model, with 13,493 units, while ending the year also as the Best Seller in the Premium Class.


But in December the BMW model lost the month Premium Best Seller was the Nio ES8, that thanks to 3,318 deliveries (11,348 in 2018), it has beaten all the foreign competition.


With the new ES6 midsize SUV said to start deliveries by mid-2019, the Chinese startup is making the best use of the short time it has to grow and win scale, so let’s wait and see.


Looking at the manufacturers ranking, BYD (20%) was a comfortable winner, winning its 5th title in a row, while the runner-up BAIC (15%), is finally profiting from a stronger lineup, now that isn’t so dependent from one key player, which could give a chance to run head to head with BYD in 2019. 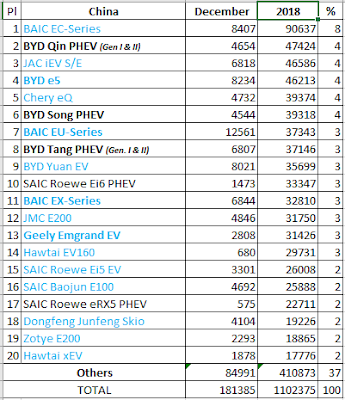