Sales grew moderately in 2018 (+15%) this year, but because the mainstream market is dropping significantly (16% this year, and 46%(!) last month), the PEV shares are jumping through the roof, with December hitting an amazing 32% PEV share and the 2018 ending at a record 19%, a significant departure from the 14% from 2017, and the 2nd highest share in the world.

Considering the behavior of the other advanced EV market, Norway, is similar behavior, with moderate PEV growth and a sales drop in the mainstream auto market, we are starting to see a trend, that can be replicated in other markets, as once markets hit some 10% market share, plugin sales slow down to 20-30% growth rates, while at the same time, the mainstream market starts to shrink, as regular buyers come to realize that fossil fueled vehicles are becoming dinosaurs.

Looking at this year Best Sellers in the Models ranking, the Mitsubishi Outlander PHEV won another title, its 3rd in a row, with a record 999 units, confirming its popularity in this market, while the Nissan Leaf got yet another runner-up spot, its Third in a row.

Elsewhere, the Best Selling small EV trophy winner, Renault Zoe had a last minute climb, to #13, while the Climber of the Year was the Volvo XC60 PHEV, that jumped from #19 in 2017, to #4 this year. 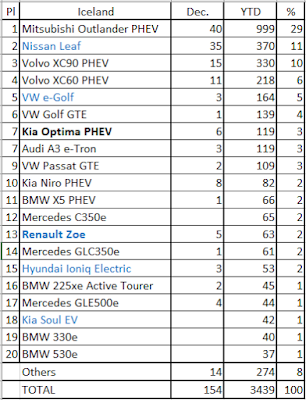