Unfortunately, a large part of this growth comes from PHEVs, that shooted +449%, while BEVs  jumped a more reasonable +111%, resulting in a PHEV share of 68% of all plugin sales, a new all-time high, and a stark departure from the 23% that plugin hybrids had in 2017, a strange case of delayed PHEV-addiction, when most markets across Europe are dropping the PHEV addiction.

But enough of complaining, in the middle of this sales boom, the surprise winner was the Kia Niro PHEV, with 1.113 units, easily winning the Models title (a first for Kia) with almost double the sales of the #2 Nissan Leaf, itself also a big surprise, having surged from na almost insignificant 20 registrations in 2017, to 637 in 2018. Not bad…

Finally, the VW Golf GTE benefitted from a great first half of the year to secure a Third Spot, thus making a completely new Podium regarding the previous year, when the Renault Zoe won the title, followed by the VW e-Up! and the Tesla Model X.

Looking at the remaining models ranking, the aforementioned Renault Zoe climbed to 4th in the last month of the year, thanks to a Year Best performance in December (121 deliveries).

In the Manufacturers ranking, Kia (31%) won the Best Seller award, its first, with Volkswagen repeating last years Second Place (15%), and Nissan (14%) winning to Hyundai the race for Bronze, but nevertheless, the fact that Hyundai was so close to the podium, highlights the rising powers that the Koreans are now. 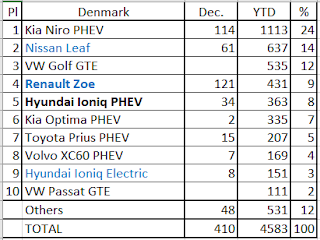 A final note regarding 2019, as this is becoming an unpredictable market and i do not know who will win (Koreans?), i will only mention my forecast for the Tesla Model 3 in Denmark: 350 units.