BEV registrations are jumping through the roof, with deliveries surging 277% YoY, to 1.090 units, while PHEVs continued their freefall (-17%) in December.

Right now buyers are running away from fossil-fueled vehicles (PHEVs included) and going into fully electric ones, but because BEVs are currently production constrained, it seems people prefer to wait in line for a BEV, than to buy/lease another ICE-based vehicle.

This starts to become a trend, because it also happens in Iceland and Norway, whenever a market is regularly at over 10%, the mainstream market starts to suffer and decline, as people move away from regular petrol/diesel vehicles.

Looking at December Best Sellers, the Mitsubishi Outlander PHEV won the last trophy of the year, with 383 units last month, its best result in the last six months.

A telling tale of the changing environment is that the remaining positions of the podium went for BEVs, with the Nissan Leaf winning Silver, thanks to 343 units, the nameplate's third 300-something performance in a row, while the #3 Renault Zoe goes from strength to strength, scoring another record performance last month, with 340 deliveries.

Looking at the 2018 ranking, the VW Passat GTE won its third (and last?) Models trophy, but with the German midsizer being discontinued, the 2019 title is pretty much open...To the Tesla Model 3.

The remaining podium places went for the Kia Optima PHEV, that almost doubled sales regarding the previous year, stealing the Silver medal from the 2017 runner-up, the Mitsubishi Outlander PHEV, that this time ended in Third.

A few last minute changes happened, the main news were the Tesla Model S reaching #10, while its Crossover sibling, the Model X, was also up, in this case, to #19, thanks to 66 deliveries, the nameplate best performance in 20 months.

The remaining change  in the Top 20 was the BMW 225xe A. Tourer switching positions with its 330e sibling, with the MPV climbing to #17. 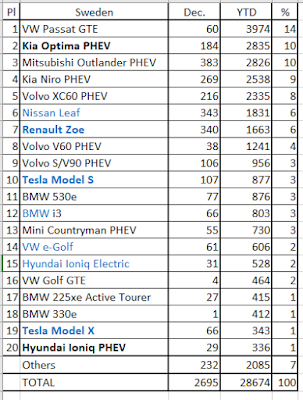 Best Selling BEV: Nissan Leaf - Despite doubling sales regarding 2017, the fact is that the BEV race was tight, as last year runner-up Renault Zoe also doubled sales, but the Japanese hatchback managed to keep the repeat last year win;

Best Selling Small PEV: Renault Zoe - Having lost again the BEV title to the Leaf cousin, the French model kept the Best Seller status among the smaller sized plugins, with no real competition.

Best Selling CUV/SUV: Mitsubishi Outlander PHEV - The most common plugin in Sweden won another category title, but the competition is getting closer, so 2019 should see a lot of surprises in this category;

Best Selling LCV: Renault Kangoo ZE - The French model won another category title, with 417 units, doubling sales of the #2 Nissan e-NV200, so there's really no competition for the Renault model.

Looking at 2019, this will be one of those markets where the Tesla Model 3 will have the red carpet to win the Models Best Seller Award, and most likely the Manufacturers title too.

Regarding share, with sales growing fast and the mainstream market set to shrink this year, the share will increase significantly, possibly reaching 15% by year end.
Published by José Pontes at January 02, 2019