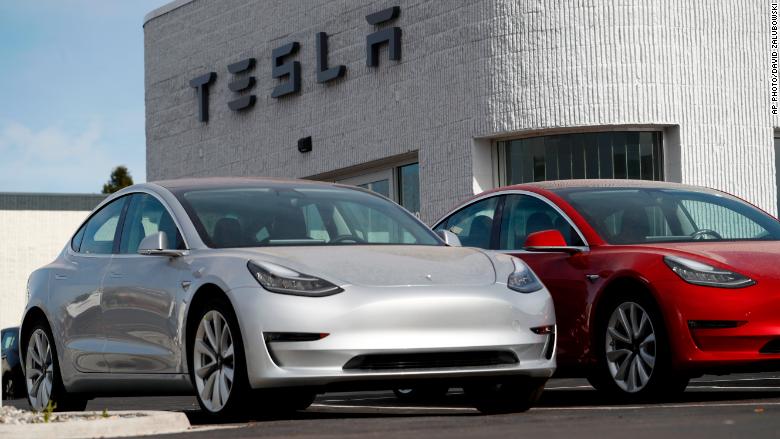 The Year of the Tesla Model 3

These results were mostly thanks to the Tesla Model 3 deliveries, that once again hit record numbers in December, delivering almost 25,000 units, thanks to a all-hands-on-deck push, making this the new monthly score to beat for a single model. Will the BAIC EC-Series surprise us and also overcome it in December? We will soon know...

Looking elsewhere, the Toyota Prius Prime ended the year in Second Place, thanks to 27.595 units, a 31% improvement over 2017, but this growth had more to do with regular Prius buyers going for the plugin version than actual conquest sales, as the regular Prius is watiching its sales shrink every passing month.

A last minute change happened in the last place of the Podium, with the Tesla Model X (finally) surpassing its older sibling Model S, thanks to 4.100 units, the nameplate highest score in two years, dropping the 2017 Best Seller to the 4th spot, with the Model S seeing its sales drop 8% regarding the previous year, nevertheless a small decrease, considering the internal competition that the Model 3 is doing.

Interestingly, it is the 3rd consecutive Bronze medal for the Model X...

Another significant change was the #6 Honda Clarity PHEV surpassing the Chevrolet Bolt, thanks to a record 2,770 deliveries, making it the December Best Selling PEV not-named-Tesla, if sales continue on the growth path in 2019, expect the Honda model to become not only the Best Selling PHEV, but also the first non-Tesla of the US ranking.

On the other hand, 2018 was bad for both Chevrolet and Ford, with the first watching both its plugin models drop regarding 2017 (-10% for the runnout-mode Volt and -23%(!) for the Bolt), while the second discontinued two of its plugins (C-Max Energi and Focus Electric), while the remaining Fusion Energi saw its sales drop 16%.

With the Tesla Model 3 black hole effect absorbing their sales, both manufacturers need to pull some attractive rabbits out of their hats to continue on the game, and with GM set to lose the fiscal incentive during 2019, life will be even harder for The General...

Looking at the final 2018 manufacturers ranking, Tesla won the race with a mammoth 53% of the market, winning its 6th title (4th in a row), while Chevrolet (10%) hanged on to Second Place, with Toyota (8%) resisting to #4 BMW (7%), winning the last place in the podium. 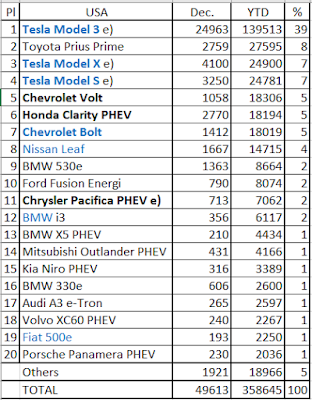 
With the Tesla Model 3 selling three times more than its most direct competitor (Mercedes C-Class)in the Premium Midsize category, i believe at this point it's best to compare the Tesla nameplate with the mainstream midsize competition.

The Tesla midsizer was Third last month, behind the Toyota Camry and Honda Accord, while YTD it ended the year in #6.

With all the models suffering from two-digits sales drops, and the cheaper SR version said to be production in 2019, Tesla is set to beat the Camry and everyone else in the second half of the year, making the following headline:

"The Tesla Model 3 is the Best Selling Car"


Now, that would be something…


Looking at the large premium car category, the Tesla Model S held steady in Third Place, and can now find place in the trophy room for another Bronze Medal.

Regarding the Tesla Model X, if sales grew 17% regarding 2017, to 24,900 deliveries, is still wasn't enough to earn it a podium spot, ending the year in 5th, with the category Best-Seller, the Mercedes GLE, scoring 46.900 units.


Looking into 2019, the market performance will depend a lot on the Tesla Model 3 performance, i believe the numbers for the electric midsizer will be close to 200.000 units, while Tesla might attempt to make a 1-2-3 podium, as the Model S and X are set for a refresh in the second half of the year.

The remaining market will see the Honda Clarity PHEV to continue rising, while the 60kWh version of the Nissan Leaf should finally give it the needed boost to aspire a Top 5 spot.

Regarding new models, the new Korean BEVs (Kona, Niro, Soul) will surely try a Top 10 standing, IF (a big if) they get enough batteries to comply with demand.