The new generation is doing wonders for the Nissan Leaf, after having won in April its first Monthy Best Seller award in six years, last month the Japanese hatchback repeated the feat, thanks to 264 registrations, with Tesla winning the rest of the month medals, the Model S was Second, with 254 units, and the Model X, Third, with 173 deliveries.

To have an idea on how extraordinary the performance of the Tesla nameplates were, these were the best off-peak-month performances ever by both models in this market, strengthening the theory that Tesla is focusing in export markets during this quarter, as it tries to delay sales in their home market, in order to only reach the 200k registrations threshold in July.

Looking at the 2018 ranking, the Tesla Model S recovered the leadership, while the #3 Nissan Leaf is now looking dangerously close to the Second Placed VW e-Golf. The German automaker needs to step up production, if it wants to maintain the Leaf in the rearview mirror and keep this year Best Seller trophy a three horse race.

The Opel Ampera-e recovered one place, climbing to #7, thanks to 85 units, while the Toyota Prius PHEV and Smart Forfour ED also rose one spot, to #13 and #14, respectively.

The leader on the PHEV League continues to be the Porsche Panamera PHEV, with 184 units and #9 in the PEV ranking, but the Best Seller of the Month was the BMW 530e, with 31 units (New record), or 14% of all 5-Series sales.

Interestingly, in #21 we now have the BMW i8, that registered 15 units in May, the nameplate best performance in 29(!) months, if we go back a few years, the BMW Sports Car was the second plug-in model (The first was the Tesla Model S) to go head to head with their ICE competition, so we wish that the second coming of the i8 can once again make some waves in the Sports Car class, for now it was the Third Best Seller of its class last month, only behind the new Alpine A110 (16 units) and the almighty Porsche 911 (54). 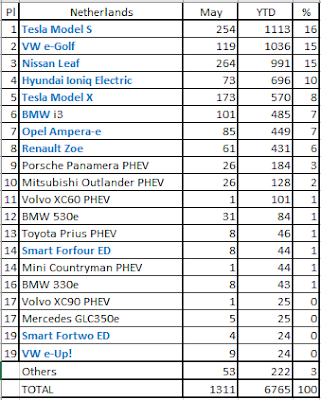 If we add regular hybrids to plug-ins, the podium is entirely made by regular hybrids, with the Toyota Yaris Hybrid leading the way, followed by the Kia Niro HEV and the Toyota C-HR Hybrid, while this time we have two Plug-ins, with the Nissan Leaf in Fourth, and the Tesla Model S in Fifth.

Looking at May registrations data, the Tesla Model S managed to steal the First Place from the BMW 5-Series, with the remaining competition ending far behind.

Big SUV's had a big hit with the end of PHEV incentives, and only the Volvo XC90 manages to have significant sales, but when the Tesla Model X deliveries are in full swing, like it was last month, there's really no competition for the American Sports-Minivan-SUV.
Summarizing, the three higher end segments (Sedans/SUV/Sports Car) of the Dutch automotive market have plug-ins as major players, proving once again that Electrification is easier to do in the higher priced segments.