King Leaf
After March's perfect storm of records, the PEV market in Norway slowed down, but still, with 5,515 units (+27% YoY) and 42% share last month, one cannot say that this market is in some kind of trouble.

Due to a less impressive performance last month, where Plug-ins just got 42% share, the fuels mix in May showed gasoline cars in the lead (26% of all sales, vs 28% in May '17), while BEVs were Second, with 22% share (+49% YoY), with PHEVs responsible for 20% of the total market, while on the other hand, diesel-powered cars scored a low 18% share (It was 26% twelve months ago), with the remainder (14%) going to regular HEVs.

Looking at May Top Sellers, the new Nissan Leaf continues on top, but has saw the VW e-Golf (622 deliveries, best result in 7 months) get closer, nevertheless, the first signs of June are saying that the Leaf will present another big result, so expect the Japanese hatchback to win a fifth consecutive Monthly Best Seller award in June.

The remaining places went for the aforementioned BMW i3, closing the podium, while two PHEV SUVs made up for the rest of the Top 5, with the Mercedes model performing a new record result, with 363 units.

Looking at the YTD ranking, the most important news were the VW e-Golf climbing to Second Place, while the Tesla Model S also rose one position, to Fifth.

But the Climber of the Month was the Mitsubishi Outlander PHEV, jumping three places, to #6, while two other SUVs had their glory moment, with the aforementioned Mercedes GLC350e climbing to #9, and the BMW X5 PHEV joining the Top 20, in #17, thanks to 174 deliveries, the nameplate best performance ever since it landed, three years ago.

A mention for the Audi A3 e-Tron, registering 137 units, a new year best, which together with other positive performances in other markets, seems to indicate that Audi is pushing once again the production of its compact PHEV. 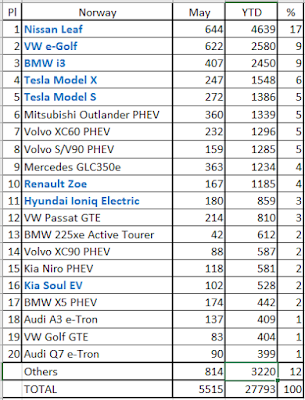 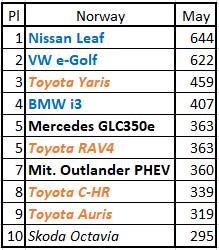 With the PEV share close to 50%, the PEV market continues to merge with the mainstream market, breaking down sales by fuel source, we have a balanced mix, with 3 BEVs, 2 PHEVs, 4 HEVs and one ICE model, Toyota is pushing their hybrids, managing to put 4 models in this Top 10, and the Yaris in Third..

BEVs took the top two places, with the best selling Plug-in hybrid (Mercedes GLC350e) being only Fifth, and the Best Selling ICE (Skoda Octávia) model showing up only in #10

With regular ICE models (close to be) wiped out from the Top 10, will it be possible to for plug-ins to outsell HEVs and make it a 100% plug-in Top 10 in June?