Waiting for the Bonus-Malus, minus two months

We start May with the Sweden sales report, the local plug-in market was up 28% YoY, with 2,016 registrations, helping the yearly tally to grow +58% regarding the same period last year, placing the 2018 PEV Share at 6.6%, dropping from the 7% of April, which had already dipped from the 7.2% record of March.

Why this sales slowdown? A new fiscal system will start on July 1st, where regular ICE models will see their taxes increased (Malus), to the profit of most PHEVs, but especially BEVs, that will see their incentives (Bonus) increase to some 6,000 euros, which explains why PHEVs are slowing down (+45% in May vs 78% in 2018) and BEVs are sinking (-26% in May, 58% in 2018).

So expect all-electric models to surge from July on, with PHEVs as a whole also benefitting from the new system.

So basically, the lower co2/km grams, the higher the incentive. Besides BEVs, will be interesting to see which PHEVs will have a boost from the new system.

Looking at last month Best Sellers, the VW Passat GTE continues to rule without discussion, having scored 321 units, two faces reappear, the Mitsubishi Outlander PHEV took the Silver Medal, with 239 units (Best result in 6 months), while the Kia Niro PHEV showed up in Fourth, thanks to 204 deliveries.

Looking at the 2018 ranking, not much changed, the main news were the Outlander PHEV climbing one position, to #4, as it tries to reach the podium positions. 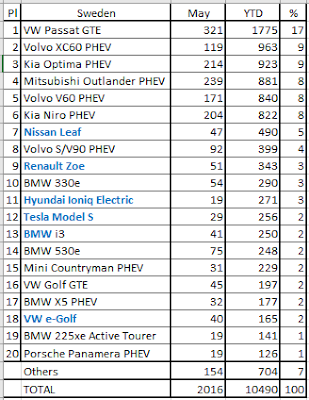 Combining May sales of regular hybrids with plug-ins, HEVs are the large majority, with three Toyota hybrids in the podium, while the VW Passat GTE is the only plug-in here, in Fourth Place.

It will be interesting to see if this ranking will be impacted by the new system, as regular hybrid prices will mostly remain the same, without any Bonus/Malus interference.
Published by José Pontes at June 04, 2018