In this context, the fact that last month the PEV market in Norway was only 62 units behind the all-time record, in a shrinking general market, one can say that this market is on the fast track for full electrification.

Proof of that are plug-ins reaching a 50% share in June (47% in 2018), for only the third time ever, with the fuels mix in June showing gasoline cars losing the lead (24% of all sales, vs 22% last year), while BEVs were Second, with 25% share, and PHEVs narrowlly beated BEVs, becoming the best selling technology in June, also with 25% share. On the other hand, diesel-powered cars scored a low 14% share (It was 24% twelve months ago), with the remainder (11%) going to regular HEVs.

Looking at June Top Sellers, the new Nissan Leaf once again put the "pedal to the metal", delivering 1,152 units, almost doubling the registrations of the #2 Tesla Model X, while the VW e-Golf (614 deliveries) was relegated to Third Place.

The remaining places went for Mitsubishi Outlander PHEV, recording 593 units, its best performance in over two years, while the Tesla Model S was Fifth, with 467 deliveries.

Looking at the 2018 ranking, the most important news were the Mitsubishi Outlander PHEV climbing to Fifth Place, while the Mercedes GLC350e rose two positions, to Seventh, thanks to a record 451 deliveries.

The Climber of the Month was the BMW X5 PHEV (441 units, new record), jumping four places, to #13, while the VW Passat GTE also took profit from the PHEV wave, climbing to #11, thanks to 253 deliveries, its best performance in 10 months.

With short range PHEVs more heavily taxed now, expect them to have a sales drought in the second half of the year, with BEVs slowly recovering places.

A final reference to the first 16 registrations of the Hyundai Kona BEV in Norway last month, a highly antecipated model here, let's hope the Korean carmaker dedicates enough love (as in, production) to make it a relevant player.

Looking at the manufacturers ranking, Nissan is still in the lead (16%, down 1%), but is closely followed by BMW (15%), Volkswagen (14%) and Volvo (12%, down 1%), so at first sight, the Japanese hatchback would need to keep a close eye on them to remain with the Gold Medal, but because PHEVs are a big part of the pursuitors lineup, they will have a harder time selling in the second half of the year, so Tesla (11%) might even get ahead of them and end 2018 in the Podium. 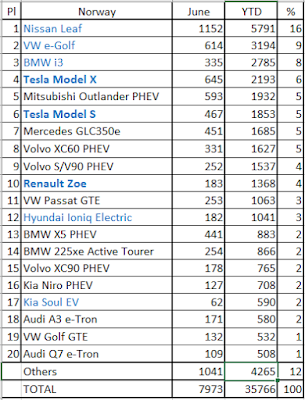 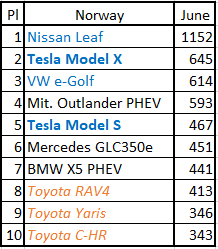 With the PEV share at 50%, the plug-in market continues to merge with the mainstream, breaking down sales by fuel source, we have a balanced mix, with 4 BEVs, 3 PHEVs, 3 HEVs and no ICE models, but the telling story is that the Best Selling HEV (Toyota RAV4) was only #8, with the remaining hybrids ending right behind it.

Hat tip to Terje, for the help on the article!
Published by José Pontes at July 09, 2018