Traditionally, February, along with January, are the two slowest months in the Chinese plugin market, but with sales growing 58% YoY last month, to some 53,000 units, especially in the context of a falling market (the mainstream market was down 17% last month), one can’t really be complain about this market, despite the PEV market share dropping slightly to 4.7% (4.3% in February), the 2019 result is already above the 2018 result (4.2%).

With all this continued growth (March could be already a record-breaking month), we could see sales double this year, surpassing the 2 million mark, making some 60% of all global PEV sales in 2019.

With symbolic export numbers, the domestic market is more than enough to absorb the current Chinese production, and most foreign OEMs are now starting to follow the seismic changes in the market, forced into electrification by the new PEV quotas (10%* in 2019), but results are still symbolic, as the foreign brands total share is still stuck at 6%.

Of this (small) cake, Volkswagen is the current big player, with 3% share, by far the Best-Selling foreign brand, and the only able to place a model in the Top 20, followed by Tesla, with 1% share, while the rest of the manufacturers share the remaining 2%.

Of course, Tesla is set to deliver the Model 3 in large numbers, starting in March, so the German maker should lose the Best Selling Foreigner soon. Maybe already in March?

In February, the headlining news were the Geely Emgrand EV joining the BYD Dynamic Duo(Yuan and Tang) in the podium.

#1 – BYD Yuan EV: We all knew that BYD’s new Baby Crossoverwas destined for success, but the rise and riseof the BYD Crossover had to stop sometime…And it did last month, with only4,332deliveries in February, as the Chinese maker might be already preparing the model for the next battery upgrade, said to be around 58 kWh. With a several thousands-long waiting list, demand is no problem, depending more on BYD’s ability/willingness to make them in large volumes (The Tang is more profitable…), than anything else. With unrivalled specs (42 kWh battery, 305 kms/190 mi NEDC range, 174 hp motor), and price (25,000 USD), success is guaranteed, and with the new battery upgrade coming soon, one can only imagine this winning streak to continue throughout the year, making it the favorite for the 2019 Best Seller award.

#2 – Geely Emgrand EV: The automaker’s bread and butter sedan had some updates a while back, including a new battery (52 kWh) and motor (160 hp), increasing its range to 400kms / 250 mi NEDC (around 280 kms / 175 mi real world), and sales have reflected this, with 3,895 units in last month, allowing it to reach the podium for the first time since last August. The best-selling Chinese brand (and Volvo owner) is milking the model strongpoints, like its quality and technology, to compensate a middle-of-the-road design and price (CNY 218,300 / $31,834), at least until the much more ambitious Geely GE11 (Geely’s Model 3) doesn’t land, so it seems the Emgrand EV looks to be living its last glory days…

#3 – BYD Tang PHEV: The second-generation Tang continues to be delivered in large amounts, registering 3,216units last month. Sales should continue strong for BYD’s successful flagship, although the upcoming (and much anticipated) Tang BEV could steal sales from it. As for the current Tang PHEV specs, BYD’s Midsize SUVsaw the battery grow to 24 kWh, originating an increased 100 kms range / 62 mi NEDC (around 70 kms / 44 mi real world), while on the power department, things have stayed the same, but with 500 hp and 0-100 kms/h in less than 5 secs, one can’t really say it was underpowered.... All for CNY 279,800 / $40,816.

#4 – Chery eQ:Chery was one of the pioneering EV brands, having won China’s Best Selling EV title three times in a row (2011, ’12, ’13), with its tiny QQ3 EV, now the automaker regained relevance with the eQ, the spiritual (and material) successor to the QQ3, having registered 3,157 units last month, allowing it to collect another Top 5 position, its first since last October. A vehicle marketed to city dwellers, for USD 24,000 before incentives, you get a funky city EV, with the 22.3kWh battery providing just enough range (200 kms / 125 miles NEDC), to cover the needs of the urban jungle (And the subsidies requirements).

#5 – BYD e5: BYD’s bread and butter electric sedan, a favorite among taxi-drivers, registered 2,476 units in February, and yet, this performance was overshadowed by their team stars Tang and Yuan. This workhorse of the BYD lineup, has good specs (61 kWh, 405 kms / 253 mi range NEDC, 218 hp), considering the price (CNY 220,650 / USD 34,600). With a new and (finally!) attractive design, the nameplate is set to continue its brilliant work as the lesser known team member of the All-Stars-rich BYD Team.

Looking at the year-to-date ranking, the big news was the BYD Tang PHEV climbing to 2nd Place, making a 1-2 score for BYD at the top, while the Chery eQ and Geely Emgrand EV also had reasons to celebrate, as both saw their standings improve, with the Chery model climbing two spots to #4, while the Geely sedan jumped seven positions to #5.

There are some fresh faces in this 2019 ranking, with Great Wall placing its two Ora EVs in the Top 20, with the funky R1 EV now in #13, while the original iQ5 EV is now #14, while the VW Passat GTE, a fresh face in China that the German automaker decided to launch recently (Danke schoen, EV quotas!), is now #18, thanks to 1,475 deliveries, a new personal best, being the only foreign nameplate in the ranking.

Finally, another startup company has made it into the Top 20, WM Motors has its Weltmeister (yes, you read it correctly) EX5 EV compact crossover in #19.

The Nio ES8 had a slow month, with just 654 deliveries, but I guess it is still too early to sound the alarm, let’s see how the ES8 behaves in March.

Interestingly, only 5 PHEVs feature on the Top 20, highlighting the BEV-friendly focus of the market (BEVs represent 75% of the plugin market), and this share is set to continue growing, as BEVs grew 58% last month, against only 18% for PHEVs

Looking at the manufacturers ranking, BYD (27%) is a comfortable leader, thanks to the success of the Yuan and Tang, while below it, SAIC (12%, down 2%) remains in the 2nd Spot, ahead of Geely (8%, up 1%), while BAIC (5%) continues in the doldrums, allegedly affected by production problems. 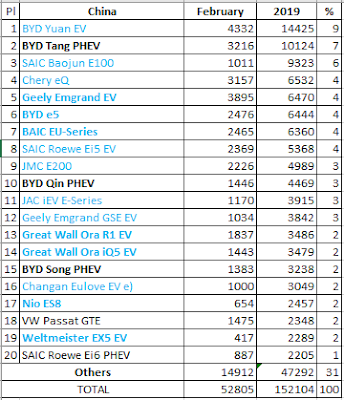