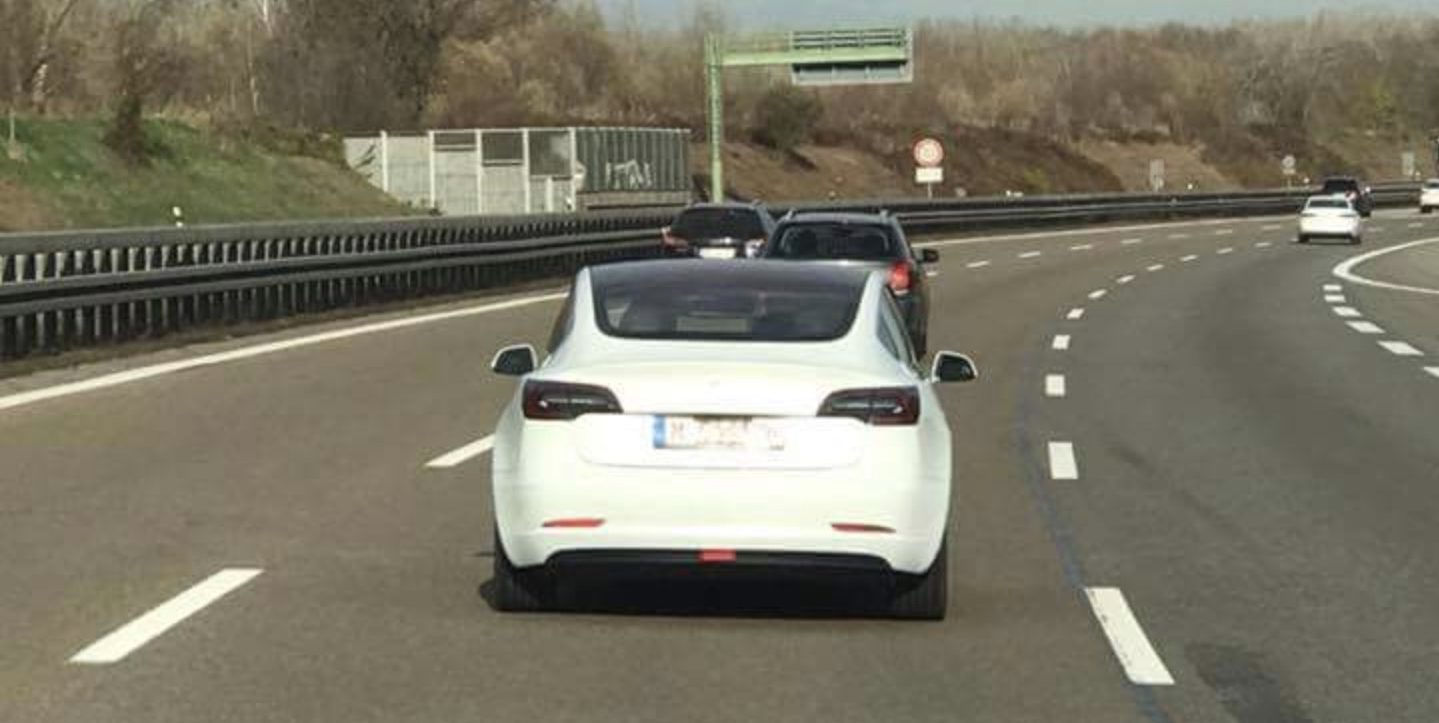 The German PEV passenger car market continues on the fast track in September, having scored a new record, with 9,452 registrations, doubling last year result, with BEVs (+150% YoY) pushing the market up, and this time PHEVs were also helping (+51%), allowing the PEV Share to reach a record 3.9% share last month, with BEVs alone hitting a best ever 2.4%, pulling the 2019 plugin share to 2.7% (1.7% BEV).

After the last win in June, September brought back the Tesla Model 3 to the monthly leadership, with 1,516 deliveries, its best result since March, while the BMW i3 picked up the runner-up spot and the Mitsubishi Outlander PHEV got the 3rd place, allowing it to be last month Best Selling PHEV.

This time the Renault Zoe was dropped from the podium, having to settle with a 4th position, with 634 units, but considering the current skin generation change, it is not too bad. Expect it to rebound soon, possibly with a couple of four-digit performances by year end. (It will surely need them, if it wants to keep the 2019 Best Seller status, but more on that below…)

In the YTD table, things pretty balanced in the front group, with the leader Renault Zoe busy doing a reskin, the Tesla Model 3 profited from the usual end of quarter high tide to come closer to the French hatchback (only 194 units separates them), and surpass the BMW i3 at the same time, dropping the German hatchback to #3.

With 3 games (months) to play, the race is on between the Zoe and the Model 3, both with a 45% chance to win the prize, with both nameplates having to deal with unkown variables: it is still unknown how fast the new Zoe will be delivered in large volumes, while the Model 3 production/allocation for Germany in Q4 could be severely affected by the predictable inflated deliveries in the Netherlands, and on a smaller degree, by the UK demand, still in waiting-list deployment.

The remaining 10% chance to reach #1 goes to the BMW i3, that has no visible production issues, but the 527 units that separates it from the leadership, added to the fact that its demand doesn't allow it to score four-digit performances, makes it a sort of a dark horse, waiting/cheering for slip ups (slow ramp up for the Zoe, allocation problems for the Model 3) from the top two, to reach the Best Seller prize.

One thing is certain, this is probably the most exciting race among the top markets, so don't forget to bring the popcorns...

Outside the podium, we have the Smart Fortwo EV climbing to #6, while the #10 BMW 530e and #11 Mercedes E300e/de continue on their private race for Best Selling Luxury Car, and the #12 Nissan Leaf had a year best performance, with 308 registrations, so it seems the 62 kWh version is (finally!) doing some good to the Japanese hatchback.

The Kia Soul EV (both generations counted), was up one spot, to #16, and is now looking to reach the back of the #15 Hyundai Ioniq Electric.

But the real story in the lower positions of the ranking, is the PHEV resurgence, with the #14 Mini Countryman PHEV scoring 223 units, its best result since January, while we now have the Volvo XC60 PHEV, that thanks to a personal best performance of 141 registrations, managed to reach #20, thus kicking out the Jaguar i-Pace from the table.

If we see some good performances coming from plugin hybrids on the Top 20, it is outside the ranking, that we take full notice that, like the Backstreet Boys, PHEVs were back in September, to the joy and/or dismay of many.

So, here are some of the most important performances: the new BMW 330e scored 168 units, already a new best for the nameplate in Germany, the new X5 PHEV registered 43 units, the Audi Q5 PHEV did 100 registrations, the Mercedes C300e/de had 61 deliveries, the PHEV version of the C-Class best result in over a year, while both the revised VW Passat GTE (112 units) and the Porsche Cayenne PHEV (63) had their best results since the new WLTP rules were enforced, a little over a year ago.

In the middle of all these PHEV landings, a certain Porsche Taycan also started to ramp up registrations, with 78 units showing up last month...


The performances of these plugin models will surely be interesting to see in the last quarter of the year...

Outside the podium, we have Mitsubishi (8%), followed by Volkswagen and Hyundai, both with 7% share, and trying to catch the Japanese brand. 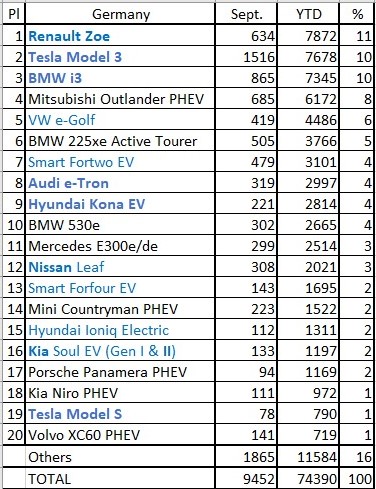 The Tesla Model 3 is closing in on the German Big 3, with the Audi A4 being the weakest link of them, so it wouldn't be surprising to see it fall behind the Californian in one of the upcoming high tides.

Outside Tesla, the only model with a certain degree of electrification is the BMW 3-Series, with 5% of sales coming from the PHEV 330e. Now imagine if 20% came from that version...It would be 600 units! Enough for a Top 5! Will BMW have enough batteries for that?


Ig the Top 2 models are (still) very much ICE models, the following ones are already electrified, in various degrees, from the 8% PHEV share of the Audi Q5, or the 9% of the Volvo XC60, to the 69% of the Mitsubishi Outlander.

This last performance begs the question: When will Mitsubishi make the Outlander na entirely plugin model?

Anyway, 3 electrified models out of 5 is already something...
Full size Car Best Sellers


Funny enough, with the exception of the #3 Audi A6, all other models have PHEV versions, and although their shares in the overall sales aren't brilliant (from 8% on the E-Class, to 14% on the 7-Series), they show plenty of space for improvement, something that the new Porsche Taycan will no doubt help to do.
Full size SUV Best Sellers


The full size SUV category seems to have a low rate of electrification, compared to the respective car class, with only the BMW X5 (4% of sales coming from the PHEV version) and the Porsche Cayenne (11%) having a certain degree of electrification, while the Audi e-Tron EV is only #7 in the category, but things in a few months could look quite different, as the new long range PHEV version of the Mercedes GLE is set to land, making it an attractive proposition, while both the Bimmer and Porsche should see their PHEV share increase in the next few months, leaving the Touareg and the Q8 as the only unplugged models.