In this context, 2019 could see Norway get some 75% PEV share, with peak months possibly reaching 90%. Ambitious? Possibly, but next year we will see the Tesla Model 3 crossing the ocean, a 60kWh Leaf, the Kia Niro EV, a revised Renault Zoe, the Audi e-Tron, etc...Now, it doesn't sound so outlandish, does it?

Proof of this never ending electric rise are the final 2018 fuel mix numbers, diesel vehicles ended with 18% share (it was 23% in 2017), gasoline also declined (22% vs 25%, a year ago), while regular hybrids (11%) also had a significant decline, confirming the HEV role as a stop gap into full electrification (Hear that, Toyota?) 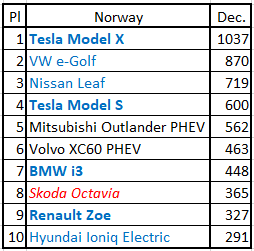 With the PEV share at 58%, the plug-in market continues to merge with the mainstream, breaking down sales by fuel source, all the Top 7 models were plugins, and if it wasn't the exceptional result from the Skoda Octavia (fleet deal? Maybe taxis?), with 365 registrations, we would finally have a 100% PEV Top 10.

Anyway, looking at December Best Sellers, we see the Tesla Model X winning the monthly title, with 1.037 deliveries, with the VW e-Golf  (870 units) winning Silver and the Nissan Leaf ending at the last place of the podium, its lowest standing since January, with the 719 registrations being its lowest result since May. Has the waiting list backlog ended?

A reference to the runnout-mode Kia Soul EV, that had its best month ever, with 197 units, ending right ahead of its cousin Hyundai Kona EV, that with 196 deliveries (and 842 in 2018), hasn't yet started to fulfill in large volumes the thousands-long waiting list in Norway.

Speaking of recent models, the 2018 Rookie of the Year was the #17 Jaguar i-Pace, with the local importer, despite the Netherlands allocation priority, managing to deliver over 1.000 units, 165 of them in December.

Two important models landed in December, with the Audi e-Tron registering its first 7 units, while the Kia Niro EV (aka e-Niro), had 34 units registered last month. 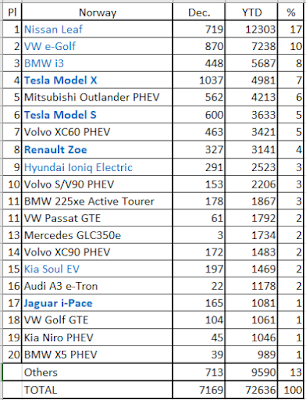 Elsewhere, the big surprise is the Volvo XC60 PHEV jump from the #15 of 2017, to the current #7, promising to be one of the competitors for the 2019 Best Selling PHEV title, along with the chronic winner Mitsubishi Outlander PHEV (the '18 win was its 3rd in a row) and the upcoming Volvo V60 T8 PHEV.


Finally, looking into 2019, the first spot will most likely go for the Tesla Model 3, with some 15.000 deliveries in Norway, or possibly more, it will depend on wether the Model 3 gets the expected sales from other European countries, if it doesn't, then Tesla will allocate more units to its #1 market in Europe.

The Nissan Leaf isn't likely to improve significantly on its 2018 sales performance, but it will probably be enough to keep the VW e-Golf and BMW i3 at bay.

Tesla will probably also take the Manufacturers title, as both VW and BMW will be betting in 2020 to go after the #1 spot.