With the recent incentive changes, it is expected that the German plugin market will have a strong second half of the year, with record months (ahem, September) allowing it to end possibly at some 10% plugin share, which would mean 2021 would be a very (VERY) interesting year to follow...#Störung '21

Although the PEV market growth is always good news, the not so good part is that much of it is due to increased sales of plugin hybrids, that are already the majority of plugin registrations this year (47% BEV vs 53% PHEV), and they should increase their lead throughout the summer, at least until September...But more on that later.

Back at last month Best Sellers, in June the VW e-Golf was beaten by the Renault Zoe, with the small EV scoring its first win since last January, the Renault model success on the other side of the rhine is a true case study for French companies, and i bet the Zoe's 22 kW AC charging has something to do with it...

Below these two Best Sellers, we have three plugin hybrids, with the evergreen Mitsubishi Outlander PHEV banking on its strong points (lots of utility for the price) to end in 3rd, with 861 units, while another oldtimer, the Audi A3 PHEV, is enjoying a second youth, having even scored a record performance last month, with 838 units.

In #5 we have a newcomer to the Top 5, with the Ford Kuga PHEV registering a record 807 units, an amazing performance for the Ford SUV, that is becoming a true success story for the Dearborn maker in Europe.


Regarding the 2020 table, the podium positions remained the same, with the Renault Zoe reducing the distance to the leader VW e-Golf to just 254 units, which could allow the French hatchback to reach the leadership by August, and even hang on to the leadership in the Super-September month...

And why will September be Super? Now imagine this, a certain VW ID.3 lands, delivering some 8,000 units (wild guess) at once, landing immediately on the podium, kicking out the Renault Zoe from the throne in the following months, and speaking of the Zoe, the French EV should register (at least) some 2,000 units in September, all while the Tesla Model 3 will benefit from an unconstrained end-of-quarter peak, and deliver some 2,500 units.

Now, that's when things start to get interesting...

The PHEV race is also interesting to see, the leader is still last year winner, Mitsubishi Outlander PHEV, in #4, but the Japanese SUV has to keep up the pace with the new #5 Audi A3 PHEV, that is ending its career on a high note, without forgetting also the #6 VW Passat GTE.

And even the #7 Mercedes E300e/de family have a shot at winning the PHEV category, especially now that thanks to the new incentives, the PHEV versions will become even more price-competitive regarding their ICE siblings, so Mercedes better find an extra supply of batteries for the E300, because they will surely need them...

Speaking of the big Merc, it has once again regained the lead in the Luxury category, after surpassing the Audi e-Tron, becoming the new Top Dog in this (high end) race, and the good news for Mercedes haven't stopped there, as its new baby, the compact A250e joined the ranking, in#20, with its young one scoring another record performance, with 562 units.

It has been said that Mercedes is having trouble in ramping up production of its small plugin model, due to the lack of available batteries, so once that issue is over, the A250e should reach higher places in the table.

And while some climb in the table, others are on their way down...Like is the case of the BMW 330e, as if it wasn't enough to be trounced surpassed by the Rock Star Tesla Model 3, the Bimmer also saw its Mercedes C300e/de arch rival say bye bye and jump ahead, and now even the Volvo S/V60 PHEV twins are ahead of it!

Oh the horror! Oh the tragedy! - You might be thinking...(Then again, maybe not)

There's a lot of merit from the Swedes, that scored yet another record performance, with 587 registrations, allowing them to jump 3 spots in the table.

There were other models shining, the #15 Hyundai Kona EV scored a year best score of 381 units last month, while the Opel Grandland X PHEV was up one spot, to #17, thanks to a record 456 registrations (It's in these kinds of markets that Opel becomes an asset to PSA), while the Ford Kuga PHEV finally joins the table, in #19, making it the first Ford to join this Top 20.

Outside the Top 20, a reference for the #21 Skoda Citigo EV, that is just 55 units from joining the table, the Mercedes GLC300e registered 337 units, the GLC best score since 2017, while the Volvo XC60 PHEV scored 306 units, a new personal best, highlighting Volvo's good moment, and the Porsche Taycan continues to ramp up deliveries, having registered a record 246 units in June.

BMW needs to get their act together, if it wants to benefit from the upcoming sales bonanza, for now things aren't looking great, the BMW i3 sales are down 44% YoY in a booming market, while a year ago, BMW had two PHEVs (530e and 225xe) in the Top 10, when now its best placed PHEV is the 330e, in #14, and like mentioned before, it's not in its best shape...

As a consequence of all this, if a year ago, BMW was leading its domestic market with 19% share, now it is only #4, with 9%...On the flipside, a year ago, Volkswagen was only 5th, with 7% share. How quickly things change, isn't it?

So BMW now needs to throw the kitchen sink (meaning adding now and in volume the 330e/530e Touring versions, and also the X2 PHEV, and start delivering the iX3 as soon as possible, while focusing on developing fast the i4), to keep up the pace, because as the market goes into warp speed and disruptions start to happen, it is decision time for the German OEMs, with the Volkswagen Group being the major force behind the current momentum and Mercedes (Mercedes!) picking up pace, thanks to a strong PHEV lineup, BMW is losing space to grow. For how long? 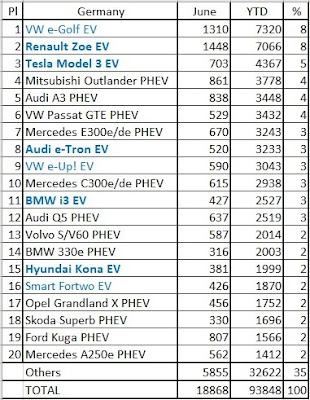