The Dog Days are Over in the French EV market, with the pandemic disruption now behind and a new stimulus package from the local government, that can go up to 12,000 eur (Now imagine if the 16,000 eur Dacia Spring EV lands in time for this kind of incentives...It will be yours for peanuts!), plugin sales surged 359% YoY in June, to a record 21,000 units, with PHEVs (up 5-fold!) faring better than BEVs, up only 205%, allowing plugin hybrids to have 35% of the plugin market last month, above this year average (31%).

When one looks at last month Best Sellers, the Renault Zoe broke all records by registering 6,012 units, a new all time high for a plugin in France, and allowing the French EV to reach #8 in the overall market in June..

The remaining podium positions went for two Peugeots (#2 208 EV and #3 3008 PHEV), while we have a surprise in the 4th position, profiting from increased units availability coming from its recent Czech Republic production, the Korean crossover broke its personal record, by delivering 674 units, winning its second Best Selling Foreigner award in a row. A sign of things to come?

Looking at the 2020 ranking, the top 2 remain unattainable, nothing significant happened in the top spots, while the new #4 Peugeot 3008 PHEV, up one spot last month, recovered 148 units from the current Bronze medalist, the Tesla Model 3, and while the distance between both is still significant (938 units), the French crossover will benefit from the fact that the next Tesla high tide will only be Spetember, so it will have two months to shorten the distance. Will it be able to do so? Please, make your bets.

Still in the first half of the table, a mention for the Koreans Hyundai Kona EV and Kia Niro EV, with both performing record performances and climbing in the table, with the first jumping two spots to #6, and the second climbing to #8. Korea is rising... (haven't i written this before?!?).

On the second half of the table there's also a lot to talk about, starting by the 2 new entries in the Top 20, with the small VW e-Up showing up in #19, thanks to a record 397 deliveries, and if we were to add all three triplets together (VW e-Up, Skoda Citigo EV, Seat e-Mii) the city EVs would be #12 in the table. In #18 we have the current talk of the town, with the Ford Kuga (euro-spec Escape) PHEV joining the table, and with a record performance to boot (455 units).

Speaking of record performances, the Mercedes GLC300e climbed two positions, to #12, thanks to a record 500 units score, while the Peugeot 2008 EV did even better, by jumping 4 spots, to #16, thanks to a record 406 units, and i believe Peugeot's small crossover is still in ramp up mode, so expect it to jump further positions in the coming months, possibly into a Top 10 position.

Finally, regarding future new entries to the Top 20, a mention to the 300 units of the Opel Corsa EV, which means its production ramp up is now well under way, the Volvo XC40 PHEV registered 306 units last month, confirming the young Swede as one of the surprises of 2020, while Renault has finally brought the cavalry to help the Zoe, with the Captur PHEV landing with a bang (388 units), while the Mégane PHEV landed in demonstration-mode, with just 16 registrations. With Peugeot coming closer every passing month, Renault couldn't just rely on the Zoe to keep its arch-rival at bay. 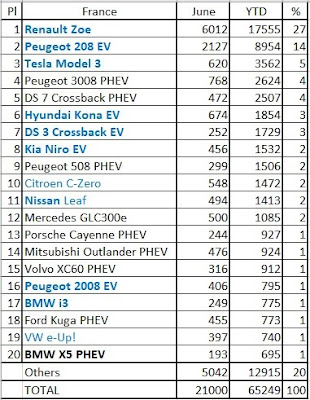