With the Netherlands moving out of the pandemic-related disruption, the transition is being done faster in the plugin category (down only 13% in June) than the in overall market (-39%)

Looking at last month sellers, we saw an interesting race, with the Kia Niro EV taking an early lead in June, only to be surpassed by the Tesla Model 3 in the last days of the month, thanks to the arrival of fresh units, that propelled the sports sedan to the leadership.

Still, it was a great month for the Kia Niro EV, as last month performance (542 units) represented its best result ever in Dutch lands, so it seems the Korean maker is finding enough batteries to keep ramping up production of its popular EV.

Coincidence or not, the other Kia BEV model, the Soul EV, also scored a record result last month, with 70 deliveries. Kia is rising...

Surprisingly, the Volvo XC40 PHEV ended the month in 3rd, with a record 374 units, being once again the Best Selling PHEV in this market, after a slow ramp up last year, the Swedish SUV is now delivering large volumes and proving its popularity in the Netherlands, which is a promising sign for the future XC40 BEV.

In 4th place we have the Hyundai Kona EV, with 326 units, a new Year Best, which means that the Czech-made units of the Korean crossover are now being delivered in large volumes, so expect the Hyundai model to continue being a familiar face in the Top 5.


Looking at the 2020 ranking, if the leadership remained in the possession of the Tesla Model 3, the reality is that this time there was more to the story than these number tell, because in the beggining of June, as the Model 3 inventory units had dried out, Tesla saw the Kia Niro EV surpass its sedan, with the Korean crossover becoming the #1 during a couple of weeks, but around the 23rd of June, Tesla Netherlands finally received new units, fresh from the Zeebrugge port, which allowed the Model 3 to run from behind and recover the lead, ending the month with a 391 units advantage over the Kia EV.

But because Tesla only had time to ship pre-ordered units for June, in July Tesla is suffering once again from lack of inventory units, so expect the Kia Niro EV to once again go after #1 in July, with the Model 3 possibly only recovering back the lead in September...

After September, it's anyone's guess, because by then there will be another big player in the market, the VW ID.3, so Q4 should see an entertaining race to follow.

In the PHEV category, we are witnessing an historic moment, after years leading the plugin hybrid segment in this country, a year ago the Mitsubishi Outlander PHEV was selling three times as much as the category #2, the Volvo XC60 PHEV, now the Japanese SUV was  trounced surpassed by the rising star Volvo XC40 PHEV, the new category leader, with the veteran Mitsubishi also having to watch its back from another youngster, the Ford Kuga PHEV, that jumped two positions in June, to #12, thanks to yet another record performance, 164 units being registered last month, so expect Ford's rookie to keep on rising in the coming months.

(Watching these great performances from the unassuming Kuga PHEV, i wonder how many pre-orders Ford Netherlands might have of the much more compelling Mustang Mach-E...)

Elsewhere, the ranking had more changes to talk about, the Hyundai Kona EV was up to #4, surpassing the sold out Opel Ampera-e, while the #11 Renault Zoe is getting closer to the #10 Volvo S/V60 PHEV, thanks to 102 units, a new year best, but the French hatchback will also have to look behind, not only the aforementioned Ford Kuga PHEV is closing in (only 9 units separate both), but also the MG ZS EV, that jumped to #13, thanks to a year best performance of 156 registrations.

Outside the Top 20, the tiny Seat Mii EV scored a record 52 deliveries, while Porsche saw its Taycan EV score a record 46 registrations last month (as much as the Tesla Model S and X counted together), while the Cayenne PHEV had 44 deliveries in June, the SUV's best performance in almost two years...

In the manufacturers ranking, Tesla and Kia (both with 14%, up 1%), are running neck-to-neck for the leadership, with the Californian maker leading by just 18 units over the Korean, followed by the #3 Volkswagen (11%) and #4 Volvo (9%).

Coming from behind, we have the rising #5 Hyundai (8%, up 1%), that could ambition a podium seat in the near future. 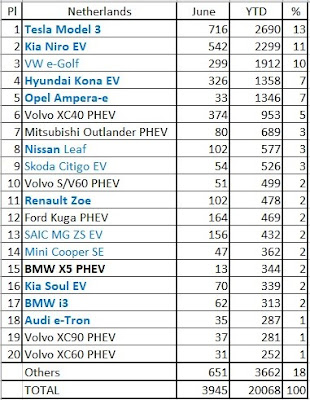 As for the remaining Top 5, the local Mercedes importer has started to deliver the C300e/de PHEV versions, so there is hope for it, something that can't be said about the 100% unplugged Audi A4...

So, if we exclude the Model 3 from the tally, this is the least electrified category of the lot. Some would say that Legacy OEMs are afraid to go head to head with Tesla's Best Seller...


Diversity is the word here, from the all-electric Mercedes EQC, to the almost all-PHEV Mitsubishi Outlander (96% PHEV units), passing by the mildly plugged Volvo XC60 (27% PHEV) or the BMW X3 (23%), and ending on the almost plugless Mercedes GLC.

While the Volvo XC60 lost a few electrification points regarding last March, the BMW X3 increased its electrification share by 9%, to 23%, and should continue to see its plugin share increase over the next few months, while Mercedes is now starting to add PHEV units to its GLC midsize SUV. Is Mercedes finally determined to expand its plugin availability?

The leadership is in the hands of the BMW 5-Series, that has a low plugin share of its sales, at only 13%.

But there are other models in worse shape, the #2 Mercedes E-Class has only 8% of its sales coming from its PHEV versions, while the S/V90 PHEVs have only 6% share of the big Swedes sales, and the Audi A6 has yet to receive its PHEV units.

The only good news are the Porsche Taycan reaching the Top 5, so we now have one BEV model in every one of these 4 Top 5's.

The all electric Audi e-Tron is 4th, while the #2 Porsche Cayenne is the only model (for now) with most of its sales coming from the plugless versions, but with a 14% rise regarding last March, to the current 24% electrification rate, expect the Porsche SUV to become also a plugin friendly model soon.
Published by José Pontes at July 07, 2020