PHEVs Up, BEVs Down
The Norwegian is leaving behind the pandemic-related disruption, dropping just 26% YoY in June, almost in line with the YTD average (-24%) with plugins representing 66% of the overall Norwegian market last month, with BEVs alone representing 44% of the total sales, keeping the 2020 PEV share at 69% (48% BEV).
While BEV registrations (-32% last month) continue on the slow lane, PHEVs are running strong (+77% in June), compensating the BEV drop, with plugin hybrids recovering ground regarding pure electrics, with PHEVs having 34% of plugin sales in June, above the 30% yearly average.

Looking at June model sales by fuel, we have the Skoda Octavia ICE model breaking for the second time in a row the 100% BEV Top 5 rule that had been happening in the past months, which can only mean good htings for the upcoming Octavia PHEV...Sure, it's not a pure EV, but it's still better than a pure ICE model, right?

The remaining Top 5 saw the VW e-Golf win another Best Seller trophy, while the Tesla Model 3 reached a podium seat, losing Silver to the Hyundai Kona EV, that scored a record 535 registrations, thanks to the fresh units coming out of Hyundai's Czech factory.

This month surprise result went to the Volvo XC40 PHEV, that came out of nowhere into #4 in June's ranking, scoring not only a personal best, but quite possibly the best performance ever by a Volvo plugin model in Norway. A star is born?

Interestingly, the Audi e-Tron is out of the Top 5 for the first time this year... Are these the first signs that the big Audi is becoming out of fashion?


Looking at the 2020 ranking, the Hyundai Kona EV profited from the recent production ramp up to surpass the Nissan Leaf and reach the podium, while in #6, the Tesla Model 3 took advantage from the (limited) end of quarter high tide to surpass the Renault Zoe, recovering one position with it.

The Peugeot 208 EV climbed to #17, and should rise further in the coming months, after all, its French arch-rival, the Renault Zoe, is 6th....

In the unplugged category, the highest standing is now the Skoda Octavia, in #8 (which bodes well for the success of its PHEV versions...), with the #10 Toyota C-HR now leading the Toyota hybrid pack

Interestingly, the Toyota RAV4 Hybrid had a slow month, dropping to #14...Is the model PHEV version already casting a shadow over the regular HEV version?

Back to plugins, the Volvo XC60 PHEV jumped two spots, to #13, thanks to 260 deliveries, a new Year Best for the midsize SUV, while in the same category, the Mercedes EQC was up to #17, thanks to 220 units, with the midsize Mercedes profiting from the production ramp up.

We have two new models in the table, with SAIC's MG ZS EV joining the table in #18, thanks to a record 316 registrations last month, while the Volvo S/V60 PHEV twins are now in #20, thanks to a record performance of 216 units in June, but the midsize Swedes shouldn't stay here for long, as in #21 we have another Volvo, with the rising star XC40 PHEV scoring a record 475 units last month, with the compact SUV possibly jumping several positions next month.

Highlighting Volvo's good moment, even the daddy of them all, the XC90 PHEV, had a good month, scoring 114 units last month, a new year best.

But it wasn't only Volvo to shine outside the Top 20, as the popular Ford Kuga PHEV registered a record 136 units, the Porsche Taycan profited from the production ramp up to score a best ever 172 deliveries, and finally, the Peugeot 2008 EV crossover landed last month with 146 units, an impressive performance that could propell it to PSA's Best Selling plugin model in this market. 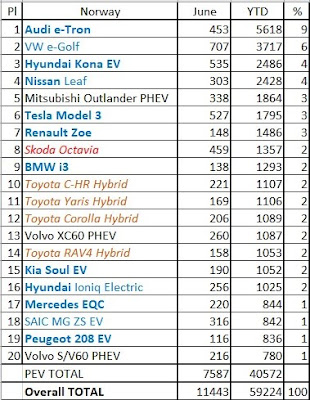