Looking at the remaining fuels, HEVs increase from 7% to to 8%, regarding last year, while petrol loses 5% of the market, now at 39%, while diesel does even worse, dropping 10% in share, to just 26%.

Looking at last month Best Sellers, it's a Volvo Fest, with a 1-2 victory and 4 models in the Top 8, with the XC60 PHEV winning last month trophy, thanks to a record performance of 807 registrations, followed by the S/V60 twins, with 752 units, while the larger twins, the S/V90 PHEV, ended in #6, thanks to 297 deliveries, with the recent XC40 PHEV reaching a record 277 units, allowing it to reach #8 in June's ranking.

Elsewhere, the VW Passat GTE was #3, with 476 units, followed by the Tesla Model 3, that due to production constraints, this time had a small end-of-quarter high tide, with just 312 units, almost being caught by the #5 Renault Zoe, that had a surprising 299 units result in June.

On the 2020 ranking, there is not much to talk about regarding the podium positions, but below them, there is a lot going on, starting with the Volvo XC60 PHEV jumping two positions, to #5, becoming the new Best Selling SUV in the table, while both the Volvo S/V90 PHEV twins and the Renault Zoe also went up two positions, to #8 and #9 respectively, with the flagship Volvos becoming the new leaders in the full size category, after surpassing the Audi e-Tron.

And the good news didn't stopped here for the Swedes, with the Climber of the Month being the Volvo XC40 PHEV, shooting 8 positions, to #12, while the XC90 PHEV rejoined the table, in #19, thanks to 142 registrations, thus making 5 Volvos in the Top 20.

Oh, and let's not forget that the first units of the Polestar 2 and its platform twin Volvo XC40 EV were registered this month, so one can say that the Swedish maker is on a roll...

But the ranking changes didn't ended there, the Skoda Superb PHEV was up one position, to #13, proving once a again the local love for station wagons, highlighted by the two positions jump of the Kia Ceed PHEV, to #14, thanks to a record 177 registrations, while the Hyundai Kona EV climbed to #18, helped by the ramp up in the Hyundai Czech factory.

Outside the Top 20, we should mention the good start of the Ford Kuga PHEV, with 102 units, yet another record performance (Has Ford struck gold with its new plugin compact SUV?), while the Porsche Cayenne PHEV also scored a record result, with 83 units.
In the manufacturers ranking, Volvo is in the lead, with 23% share, up 3%, while Kia (18%, down 1%), keeps the 2nd place, while Volkswagen (12%, down 1%) closes the podium, ahead of Tesla (7%, up 1%). 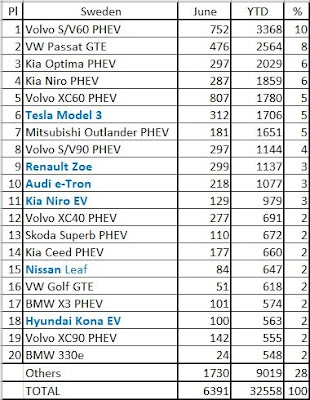 Nothing new on the ranking, with the Best Sellers holding their positions and keeping the Tesla Model 3 in #4.

Looking at the remaining models, all have PHEV versions with variable share of the nameplate sales, from 100% in the Kia Optima, to 37% of the Volvo twins, the 30% of the BMW 3-Series (the SW body of the 330e PHEV is badly needed to jump start sales again), passing by the 59% of the VW Passat, so all in all, electrification is on the right track in this category.

We now have a fully electrified Top 5 in this category, now that the local Mercedes importer is selling the GLC300e in volumes, being now responsible for 19% of all GLC registrations.

This highlights the fast electrification rate that is also going on, with the Outlander (96% PHEV sales) being basically a plugin model, while the BMW X3 (58%) and Volvo XC60 (39%) are increasing fast their PHEV take rate, with the same being said about the Audi Q5 (29%).

Considering all this, it won't be surprising that soon all models on this Top 5 will have over 50% of units plugin capable.

While the flagship Volvos (24% coming from the PHEV version) rule the category with an iron fist, below them, the BMW 5-Series jumped to the runner-up spot, but lost 7% in the PHEV take rate, now at 27%.

Elsewhere, the Audi is starting to deliver the first units of the A6 PHEV, so expect a fully electrified Top 5 soon.

Finally, the  #4 Mercedes E-Class keeps its 29% PHEV take rate, so this category is having a harder time to be electrified than others.

One of the categories with best results regarding electrification, here the all-electric Audi e-Tron is the ruler of the category, ahead of the Volvo XC90, that has 57% of its sales coming from the PHEV version, which is midway between the BMW X5 (73% PHEV) and the Porsche Cayenne (88%), with this last one increasing dramatically its electrification rate in the last few months, highlighting Porsche's recent love for plugins.

Interestingly, the Mercedes GLE climbed to #3, but it wasn't thanks to its PHEV version, as the GLE350de for now only represents 2% of the model total sales.