Nissan Leaf back at #1 in 12% plugin share market
Despite the end of the Coronavírus-related lockdown, the overall automotive market is still in the doldrums, with sales at half of what they were last year, but plugin registrations actually grew last month, by 3%, with 1.306 plugins being registered, with the plugin share hitting 12% in June, in line with the 2020 result.

And to think a few months ago i was feeling bold when writing that Portugal could reach 10% share this year...

But this great result is much due to plugin hybrids, that are currently on fire, growing 112% last month, to 819 units and 63% of the PEV market, while BEVs have seen better days, in June their sales dropped by 44%, to just 487 units, making this traditionally BEV-friendly market now tilt into PHEV territory, as these last ones now have 51% of the total plugin sales this year

Looking at last month Best Sellers, we have a surprise winner, after a series of brilliant results across Europe, we now see the Volvo XC40 PHEV shoot to #1 in Portugal, with 140 registrations, the best result ever for a plugin Volvo in this market, and allowing the young Swede to surge 10 spots in the table, to #8.

Moving on to the YTD ranking, the Tesla Model 3 was removed from #1 by the Nissan Leaf (not enough Model 3 units to be delivered?), having seen the #3 Renault Zoe getting closer too, so from now on, we should see an interesting three-horse race.

Below the podium, besides the aforementioned Volvo XC40 PHEV jump, the PHEV version of the Mercedes A-Class, a popular model in the overall market, the A250e, jumped three positions to #10, with a personal best score of 84 units, with the three-pointed-star model  ending the month only 1 unit behind the #9 Volvo XC60 PHEV, so expect the Mercedes hatchback to continue climbing in the ranking.

We have a new face in the table, with the Volvo S/V60 PHEV twins reaching #19, thanks to a Year Best performance of 31 deliveries, highlighting the good month that Volvo has had in June.

Interestingly, there is not one Volkswagen in the Top 20, and the only VW Group nameplate present is the Porsche Cayenne PHEV(!), in #18...

Below the Top 20, there are a number of new models shining, with the Opel Grandland X PHEV registering 21 units, the Porsche Taycan scoring 18 deliveries, while the Peugeot 2008 EV had a record month, with 50 units, so we should see the small crossover in the table soon. 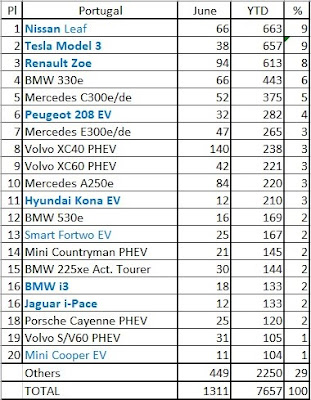 Comparing the Model 3 deliveries against its midsize competitors, we can see that the Tesla midziser has lost space, dropping from #1 in March to #3 in June.

We should also notice that the remaining models also have a significant electrification rate, with 51% of the leader BMW 3-Series sales belonging to the PHEV version, closely followed by the 45% electrification rate of the Mercedes C-Class and the 29% rate of the Peugeot 508, although the French midsizer lost 9% share regarding March.

In the last place of the Top 5, the plugless Audi A4 was dropped in favor of the Volvo S/V60 (33% of sales coming from the PHEV versions), making this now a 100% electrified Top 5.

Electrification is strong here too, with all models with different electrification levels, and with the exception of the leader Mercedes GLC (13% electrification rate), all the other models have a large share of sales coming from their PHEV versions, with the Mitsubishi having a (surprisingly low) 57% rate, the French DS having 56%, and the Volvo 56%.

Finally, with the BMW X3 jumped to #3, and its 40% electrification rate is still below average, but that is something that should change during the coming months.

In the full size car category, there's good and bad news, on one hand, we have the two category leaders with a significant level of electrification (E-Class - 52%; 5-Series - 46%), one 100% BEV model (Porsche Taycan) now showing up on the Top 5, while the #3 Volvo S/V90 twins continue increasing their PHEV share, now at 59%.


On the other hand, Audi only now has started to deliver the PHEV versions of the #4 Audi A6, so its electrification rate (4%) is still small, but should grow in the coming months, making this another heavily-electrified category soon.


This is possibly the most electrified end of the market, with two models being basically PHEV-only models (Cayenne - 93%; Range Rover Sport - 96%), and with two other having also a large electrification rate (BMW X5 - 66%; Volvo XC90 - 77%), leaving the Mercedes GLE as the bad guy here (only 14%).

But there is hope for the big Mercedes, as regarding last March, its electrification rate doubled, so it should become a more PHEV-friendly model throughout the year.


Over two years have passed since the last survey regarding the distribution of EV's in my home country, based on used car websites and other sources, i have updated it, remember, this should only be seen as an trend indication of how electric vehicles are distributed across the portuguese territory, these are not exact stats.


For the information to be easier to understand for people not familiar with the local geography, i have divided the country in seven areas: Northwest (Porto, Aveiro, Braga and Viana do Castelo  districts), Northeast (Bragança, Vila Real, Guarda and Viseu), Central Portugal (Coimbra, Castelo Branco, Leiria and Santarém), Lisbon Metropolitan Area (Lisbon and Setubal), South (Portalegre, Evora, Beja and Faro), Azores and Madeira Islands. 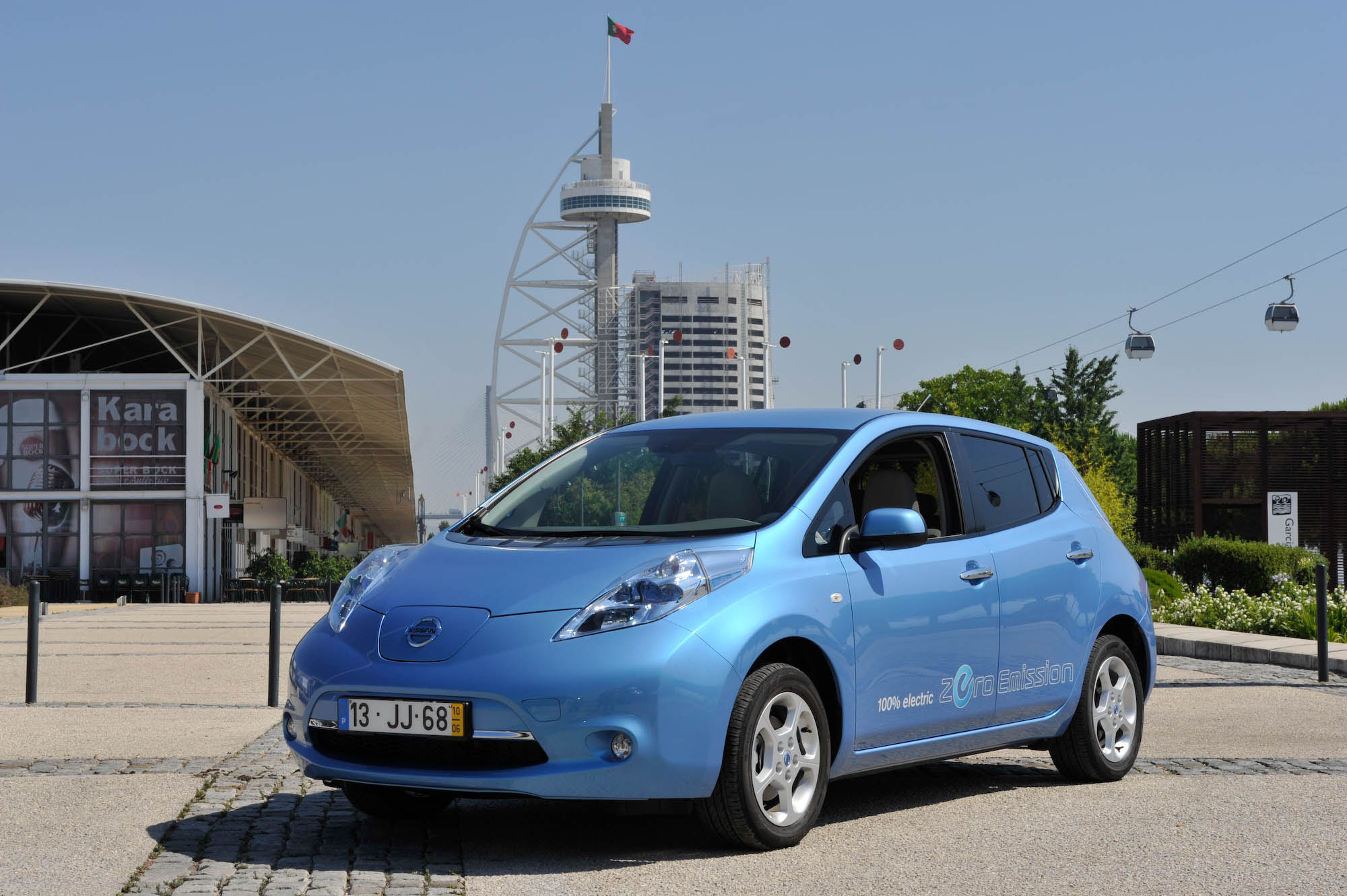 Following Lisbon Metro area, this is the second area with most EVs, with a mild(ish) climate all year round, here the Renault Zoe, Nissan Leaf and the BMW i3 are the most popular EVs, with a little (big) help from 2nd hand imports, with other models also common here, like the Kia Soul EV, Hyundai Ioniq EV or both Smart EVs. Interestingly, there are already a couple of Peugeot 208 EV on sale.

Known for having the harshest climate in mainland Portugal, with cold winters, where ice and snow can be an issue, while the summer can reach 40ºC temperatures, it could be expected that crossovers would be popular here. That's not the case, the most popular EV is now the BMW i3, by a long shot, far outpacing the next common EV in this area, the Nissan Leaf.

In the transitional North-South area, the Nissan Leaf, Renault Zoe and BMW i3 continue as popular as ever, with plenty of 2nd hand imports, but there are also plenty of Teslas, mostly Model S, but also a few Model 3's, and a couple of Jaguar i-Pace.

Lisbon is not only the nation's capital, but also the only place where you find EV's everywhere, with 35% of the total plug-in fleet. With a very diversified fleet, besides the  more common Nissan Leaf, Renault Zoe, or BMW i3, there are also a lot of Smarts and Teslas (mostly Model S and X), with the Kia Soul EV and Hyundai Ioniq EV being also popular models.

In this sun-burned area, most of EV's are concentrated in the tourist-friendly Algarve, if the BMW i3 and Nissan Leaf remain staple choices, the Renault Zoe is replaced in popularity by the Smart Fortwo EV, with other "exotic" choices appearing like the tiny Peugeot iOn, Tesla Model S or the Citroen e-Mehari convertible. This last one is fitting for the Algarve...

Plug-ins are still in their infancy here, including the public infrastructure, which is a shame, as the mild climate and short distances are good conditions for plugins. Anyway, the most common EVs here are the BMW i3 and Nissan Leaf.

The Madeira EV scene is much more developed than in the Azores, with public infrastructure, including fast-charging and serious investment from local importers, especially Renault. And this investment is paying off, with the most common EV being the Renault Zoe, while the Kangoo EV and the Twizy are also common. The Nissan Leaf and BMW i3 are also popular here, and even a couple of Tesla Model S exist there (considering the narrow and winding roads of the Madeira island, it should be an interesting challenge to drive and park such a barge...).
Published by José Pontes at July 10, 2020