The good thing about this market is that it is a BEV-heavy market, with all-electric cars representing 70% of sales. When governments play the incentives cards right, good things like these (Large share and growth) happen.
Looking at the models ranking, the news of the year is the thundering leap of the VW e-Golf into the leadership, with two consecutive record performances (115 units in January and 191 in February), the German hatchback passed right by through the Renault Zoe and BMW i3, to sit in the Best Seller Throne, with space to spare.

Another BEV with a good start is the Hyundai Ioniq Electric, #4 with 122 units, it seems the increased production is starting to create some benefits for the Korean hatchback.

The same can't be said about the Tesla nameplates, with the Model S only Seventh, and the Model X in #17.

Will we see a recovery for the American brand in March?

In the manufacturers ranking, Volkswagen is ahead with 12% share, followed by BMW (8%), and Renault (7%).

Just outside the podium, we have Hyundai, with 6%, waiting for more units allocation of their Ioniq twins (BEV & PHEV), in order to jump into the podium.

But then again, all podium bearers have that same problem... 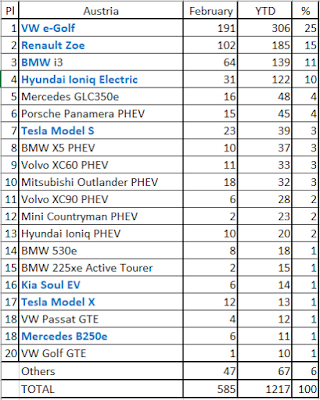