Ampera-e Big in Switzerland (but BMW i3 is #1)
The Swiss PEV market was up 77% last month, by registering 675 units, placing the 2018 registrations at 1.207 units, up 43% YoY, with the PEV Share climbing to a record 3.7%.
In an off-peak month for Tesla, it was up for the BMW i3 to pull the market up, with the Bimmer scoring 232 registrations, stealing the leadership from the Opel Ampera-e hands (!?!), with the model German-American model registering only 24 units last month.

The Renault Zoe is now Third, thanks to 63 deliveries in February, while the Tesla models are strangely in low places, with the Model S in Ninth and the Model X in #20. Will we see a Tesla March Madness month in a few weeks?

In the manufacturers ranking, BMW (33%) profited from the i3 exceptional performance, to jump into the leadership, leaving Volkswagen (10%), Renault (9%), Opel (9%) and Volvo (8%) running for the remaining podium positions. 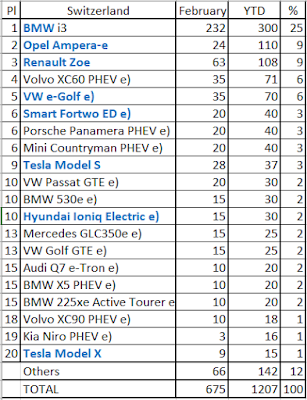