Considering that January and February are traditionally the slowest selling months for Plug-ins in the US, one can say that the PEV Share will only go up, how high can it reach? 2% would be a landmark, but that will depend on the ramp up of several models, namely...

...The Tesla Model 3. When the car was unveiled and first deliveries were made, back in July, Tesla set an ambitious production ramp up program, that unfortunately has been descredited by the reality of the following months, with only 260 units being made in Q3 2017, instead of the announced 1.630, while Q4 showed some 1.500 units being delivered, more or less what was expected for the previous Quarter, all while dialing back the goal of 20.000 units/month to June '18, delaying the original goal by six months.

Let's hope that Tesla's new baby doesn't get any more delays and the new and more realistic production goals are met. For now, we are at 2.500 units/month, enough to make it already the best selling plug-in in the USA.

Also important to notice in Tesla's performance, is the fact that many resources have been diverted to the Model 3 ramp up, placing the Model S & X production in the back seat, which is leading to waiting lists for the older models, while this can be manageable during a limited period (3 months? 6 months?) of time, Tesla should be aware that this situation cannot go on forever, as it would damage revenue and make investors fearful of the automaker long term future.

And let's not forget that Tesla is still dependent on the goodwill of investors...2018 is truly the "make it or break it" year for Tesla.

But i digress. Tesla is not the only one with a slow ramp up, the Third Placed Chevrolet Bolt became also known for their glacial-paced ramp up, this year sales are up a healthy 23%, to 2.601 units, and with GM CEO Mary Barra promising increased production of the all-electric model, one can only hope that the ramp up starts to develop at a faster rate. I think we would all be Happy if they reach 5.000 units/month by June.

Two other important models in ramp up mode are the new Nissan Leaf, having delivered 895 units in its landing month, and with over 10.000 customers waiting for their new EV, Nissan should have no trouble ramping up production to 2k-3k units in March, while the Honda Clarity PHEV should countinue to slowly ramp up production until some 1,5k-2k units/month is met, allowing it to race for a Top 5 place. As for the BEV Clarity, the short range and limited availability should keep demand in the low hundreds, so there are no production constraints here.

The Mitsubishi Outlander PHEV is something of a question mark, on the one hand it's an affordable midsize-SUV, with decent range for a PHEV, so it has a giant market all to itself, on the other hand, it's a Mitsubishi, which is not the strongest brand in North America (Although, Mitsu had the same problem in Europe, and that didn't prevented the Outlander PHEV from becoming a best Seller), and most importantly, production is limited to 4.000 units/month, so with some 2.500 units/month already going to existing markets, Canada and the USA should have only 1.500 units to divide between themselves. Currently some 500 units are going to North America, so an additional 1.000 could go there, should the Japanese automaker find enough customers for them.

Looking elsewhere, the Kia Niro PHEV started its career with the right foot, joining already the Top 20 in #19, while the Toyota Prius Prime started the year in Second Place, up 50% YoY, and will be another serious candidate to a podium seat, all while being also the strongest candidate for the 2018 Best Selling PHEV trophy.

Looking at the manufacturers ranking, Tesla (28%) distanced itself from Chevrolet (15%) in the leadership race, while in Third Place we have Toyota (12%), ahead of BMW (9%). Ford is Fifth, with only 7% share, down three points share on 2017. 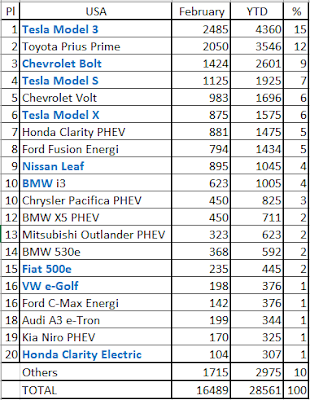