Tesla Model S is back in business

February had 1.058 registrations, up 116% regarding the same period last year, with BEVs making for the most of the market (85%), contributing decisively for the current 2.8% PEV market share, a good improvement over the 2.2% of last year.

After a dysmal January (Only 57 deliveries), February crowned the Tesla Model S as the Monthy Best Seller, thanks to 167 registrations, allowing it to jump four places in the YTD chart, to Number Four, but the rebound performances weren't exclusive of the Tesla nameplate, as the arrival of the new Nissan Leaf meant that the Japanese nameplate rebounded in a big way, by delivering 150 units, its best result in 11 months, a promising start for the Nissan EV.

A familiar face in this market also had surprising result, with the Mitsubishi Outlander PHEV registering 35 units, its best result in 9 months, which nevertheless wasn't enough to win the February Best Selling PHEV award, as the Porsche Panamera PHEV (36 units) continues as hot as ever.

Looking elsewhere, the Opel Ampera-e continues in the top places, being Fifth in February, with 90 units, and Third overall, while the #7 Renault Zoe closes an exclusively BEV Top 7.

In the manufacturers ranking, Volkswagen (24%) is comfortable in the lead, while in Second Place we have Hyundai (16%), now followed by Tesla (11%). 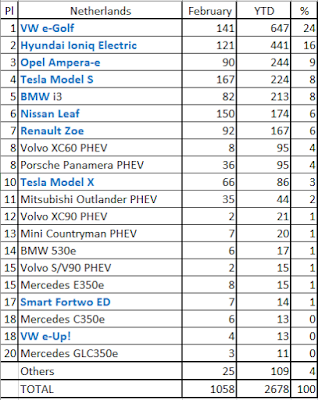 If we add regular hybrids to plug-ins, the Kia Niro is steady in the leadership, with 389 units, followed by three Toyotas, while the Tesla Model S, Fifth with 167 registrations, is the only Plug-in this month in the Top 5.


Looking at the February registrations data, the Tesla Model S managed to end in Third Place, its first podium of the year, but miles behind the leader BMW 5-Series.

With the March peak coming soon, we will know if the American Sports Sedan can keep up with the Bimmer.

Big SUV's had a big hit with the end of PHEV incentives, and in 2017 the Tesla Model X was the absolute ruler of the category, but with the current Model 3-derived production contraints at the Tesla factory, the American Sports SUV is being delivered in less significant numbers, losing the leadership in the beggining of the year.

February was the same story, with the Volvo XC90 just edging out the Model X.