Nevertheless, the current PEV share sits at 1.7%, which is on par with last year result, so  PHEVs have been able to compensate the BEV slowdown.

Looking at February Best Sellers, the Renault Zoe returned to four-digit results (1.155 registrations), but it was still down 26% YoY, with the Nissan Leaf returning to its natural place (Second), with 306 deliveries, the nameplate's best result in 11 months, while two Plug-in hybrids show up in the Top 5 (Volvo XC60 PHEV and VW Passat GTE), both establishing record numbers. A sign of new times in France?

In a market usually known for its stability, there was a lot to talk about below the Zoe, the big news were the Nissan Leaf returning to Second Place in the YTD ranking, while the Kia Soul EV dropped three positions to #6.

Another model on the rise was the VW Passat GTE, up five positions, from #12 to Seventh, while the Smart Fortwo ED stumbled to #9.

Finally the Mercedes E350e had its best performance ever (79 units), allowing it to jump eight positions to #12.

In the brands ranking, Renault (33%) continues in the driver seat, followed at a distance by BMW (11%), while Mercedes and Volvo, both with 8% share, are running for the Bronze Medal. 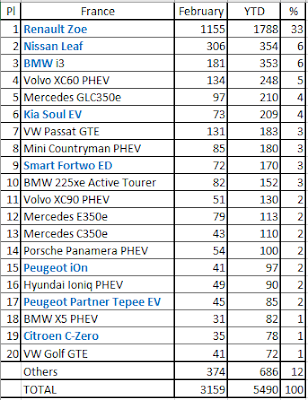