VW e-Golf Shines
Another positive month in February, with Belgians registering 1.058 passenger Plug-ins, up 41% YoY, placing the PEV Share at 2.4%.
Too bad then that PHEV's continue to be the Trend du Jour, with 80% of all PEV registrations being Plug-in hybrids, with this type of technology owning 8 out of the 10 Best Selling models.

But the recent PHEV incentives changes have produced some changes, once known for being the favorite home of big luxury SUVs (The BMW X5 PHEV and Volvo XC90 PHEV were regular features in the podium, just to name two of them), now sales are somewhat more distributed, with two midsize SUVs (XC60 & GLC350e), one compact car (e-Golf), a compact Crossover (Countryman) and a large sports sedan (Panamera) making the Top 5.

The VW e-Golf deserves a special mention, because thanks to a fleet deal in January, it started the year in the lead, the last time a BEV started in the pole position was in 2014...A sign for better days? Let's hope so.

On the other hand, Tesla was off to a slow start here, with only the Model S showing up on the Top 20, in #14.

In the manufacturers ranking, last year winner BMW is steady in the leadership, with 25% share, while Mercedes (16%) and Volvo (15%) are running for Silver. 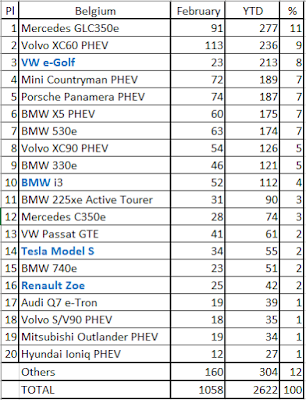