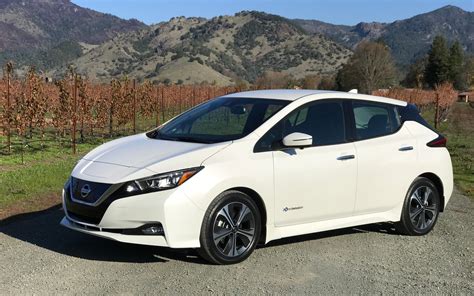 Nissan Leaf lands with a bang

With 1.839 registrations in February, sales continue on the rise, with the PEV share now firmly north of the 1% threshold (1.5% in February,  a new record), the Canadian market is being shaken by the arrival of new players, with the Mitsubishi Outlander PHEV being the main headliner, registering 230 units in only its second full sales month, placing itself between the Chevrolet Best Sellers, while the recent VW e-Golf was Third in February, with 180 units, a new personal best. The Toyota Prius Prime is also rising, with the 135 deliveries allowing it to jump three positions to Seventh.

The new Nissan Leaf also started its career in February, with 179 deliveries, placing it already in Sixth, but the Japanese hatchback has its eyes set on the podium, a difficult task, considering the Canadian love for the Chevy Volt, the flying start of the Outlander PHEV and the fast approaching arrival of the Tesla Model 3.

Another important result were the 93 deliveries of the Honda Clarity PHEV, replicating in Canada the success it is having South of the border, with 93 registrations in its second full sales month. Now, after the USA and Canada, Honda could start to sell it elsewhere, not only in its domestic market, but in Europe also, considering the current (bad) state of the Japanese maker on this side of the Pond, it wouldn't be the worst thing they could do...

Looking into March preliminary results, there's many reasons to be happy about: The Chevrolet Volt had its second best result ever (555 units), the Outlander PHEV continues to grow, clocking 351 registrations, all while the Prius Prime and Clarity PHEV have beaten their sales records, with the first registering 500(!) units, and the second 119. Last, but not the least, the new Leaf had 423 deliveries in its only second sales month, a new record for the nameplate.

Looking at the manufacturers ranking, Chevrolet (29%, down 2%) is stable at the Throne, keeping Mitsubishi (13%) miles behind.

In Third Place we now have Volkswagen, with 8% share, having surpassed Chrysler (7%), but with the rising Nissan (6%) just behind, the VW tenure on the podium will be short lived. 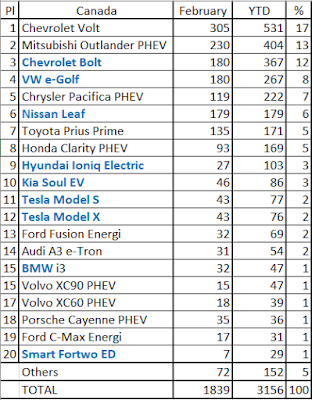