This record month allowed the 2018 PEV share to jump to 2%, already above last year result.

Looking at March Best Sellers, the Zoe (#24 in the mainstream market) has scored its best result ever since it landed in 2012, with the Renault BEV scoring 2,245 deliveries, with the runner-up Nissan Leaf also scoring a personal best, with 719 deliveries.

Underlining the March Madness this market had, the Third Placed BMW i3 also scored a record result, with 319 deliveries, and not to fall behind, the #4 Tesla Model S also had a best ever result (162 units).

In short, all the top four sellers in March had record numbers. Not bad, not bad at all...

In a market known for its stability, there was a lot to talk about, below the Top 5, two new nameplates joined the Top 20 last month, with the Tesla Model S jumping all the way up to #11, while the Hyundai Ioniq Electric (127 units, new record) reached #15.

Other models on the rise were the Mini Countryman PHEV and the Smart Fortwo ED, climbing one position to #7 and #8, respectively, while the Peugeot electric siblings had a positive month, with the iOn registering 98 units (Year best), while the Partner Tepee EV had 110 deliveries, the nameplate's best result so far.

It seems the French automaker discovered they are missing out from the hottest segment on the market (Plug-ins, of course) and are throwing to the market whatever they have in the stable. Too bad what they have is a 600 9 year old badge-engineered mini car (iOn) and a van with windows (Partner Tepee EV), that could have it's own sales niche, if it wasn't hampered by a small 22.5kWh battery, in world where the direct competitors have 33 kWh (Renault Kangoo ZE), or even 40kWh (Nissan Evalia BEV).

Below the Top 20, there are a few notable mentions, the BMW 530e had a record result, with 56 units, while the Tesla Model X delivered 79 units, its second best result in France.

In the brands ranking, Renault (37%, up 4%) continues in the driver seat, followed at a distance by BMW and Nissan (Both with 10%), while Mercedes and Volvo, both with 5% share, are far from the podium positions. 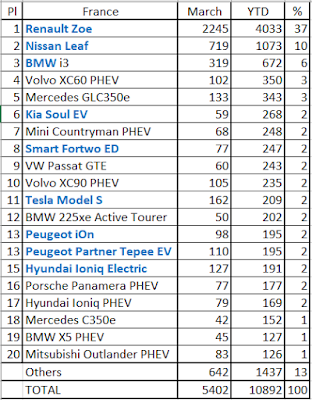