Models: Nissan Leaf claims the Throne
Registrations grew a healthy 53% in March, to some 142,000 units, the second best result ever, at this pace, the current record (174,000 units, in December '17), is in danger to be broken next September, or even earlier, in June.

This positive start of the year is placing the 2018 numbers at 305,000 units (+59% YoY), with the global PEV share now standing at 1.3% share, a new record, which makes the prospect of this year the global PEV market reaching two million units (and over 2% share) a realistic goal.

This month the new Nissan Leaf and the Tesla Model S and X were the headliners, with the Japanese hatchback deliveries now in full swing, registrations surged to over 11,000 units, not only a new record for the nameplate, but also only the second model to reach the five-digit area ever. With a five-digit long waiting list, expect registrations to continue around 10,000 units in the next few months.

Both Teslas also had their usual end-of-quarter-peak, with the Model S reaching 8,274 deliveries, allowing it to jump into #5, while the Model X delivered 7,115 units, the nameplate best performance in 6 months, placing it in #7. Unfortunately, despite delivering a record 3,820 units, the Model 3 couldn't hold on to a Top 10 place, dropping to #12, thus preventing the presence of 3 Teslas in the Top 10. Will we see that happen in April?

As for the remaining Top 10, the Toyota Prius PHEV climbed to Third Place, winning at the same time the Best Selling PHEV status from the hands of the BYD Song PHEV, this drop underlined the poor overall performance of the Chinese Top 10 models, with all three dropping positions.

The lower two places saw a close race between the Mitsubishi Outlander PHEV (4,226 units, best performance in two years), and the Renault Zoe (4,430 units, a new personal best), with both models ending separated by just 29 units, to the benefit of the Japanese SUV.

Looking at the BEV / PHEV breakdown, pure electrics increased significantly their lead (+4%) in March, now representing 60% of the total market, expect this score to be constantly improved throughout the year, maybe to levels above the 65% share of 2017.

Finally, looking at the Fast-Charging protocols race, the 43kW AC of the Renault Zoe has only 3% share, the Tesla SC standard has 10% of PEV sales, Chademo has 13% and now the juiciest pieces of information...

...There has been a lot of talk regarding the supremacy of CCS over the remaining fast-charging standards, and that we should ditch everything else, but the truth is that at 8% share of sales, it is not only behind Chademo, but also behind the proprietary Tesla SC standard. And that's before mentioning the elephant in the room, GB/T. The Chinese standard has 14% of all sales...Making it the Best Selling standard in 2018. 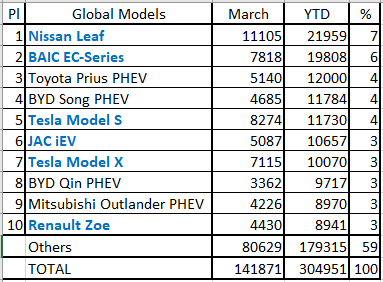 Manufacturers:  Tesla jumps to #1
March signaled significant changes, the most important being the rise to power from Tesla, thanks to a record shattering 19,209 deliveries, but it wasn't only the American manufacturer to present record performances, Nissan crossed for the first time the 10,000 units, Volkswagen broke its 27 months record(!), with over 8,000 deliveries, while Renault also posted a new record result, with 5,734 units, allowing it to climb to #9, and to underline The Alliance perfect score, Mitsubishi posted its best result (4,317 units) since 2015.

On the other hand, BAIC sank to Fifth Place, despite having seen its sales grow by 24% YoY, this one telling tale of the moment we are living, growth alone is not enough to be among the Best Sellers, you have to push boundaries almost on a monthly basis in order to stay on top.

Outside this ranking, the #11 Chevrolet missed a presence  in the Top 10 by just 150 units, while Mitsubishi is digging itself from obscurity and is now #12, with 9,200 units. 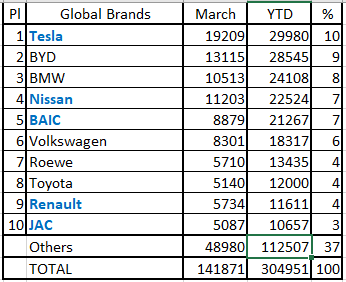 Looking at sales by brand origin, the Chinese lost 2% share, to 36% of all deliveries, while Japan profited from the Leaf surge to jump to 14% share, that nevertheless were not enough to reach the podium, as Germany (20%) and the USA (15%) are still in the medals positions.