Last month, the Chinese OEMs represented roughly 40% of all PEVs registered globally, an impressive number, that is sure to increase during 2018, possibly even beating the 46% record of last year.


With symbolic export numbers, the domestic market is more than enough to absorb the current Chinese production, helped by the fact that it is still a protected market and foreign OEMs hadn’t yet looked seriously at this niche, but with PEV quotas to be fulfilled in the near future, foreign brands are finally putting an effort, proof of that is that overseas makers now have a record 7% share. Of this (small) cake, 3% belong to Tesla, 2% to BMW, and 1% to Cadillac(!), with the remaining manufacturers sharing the final 1%.


In March, the main news was BYD stepping up production, having its second-best month ever (13,100 units), only below the 16,000 units of last December. With a new Qin sedan and Tang SUV coming soon, expect the Chinese carmaker to start posting 20,000-plus performances in the second half of the year, securing another Manufacturers Title (Its 6th) in its home market, while on the Global stage, it could be the only OEM playing in the same league as Tesla, once the Californian brand finally steps out of the 9 circles of Production Hell. 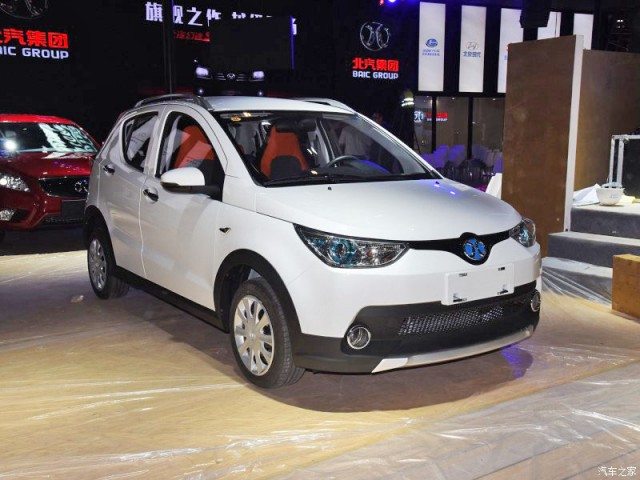 #1 – BAIC EC-Series: After a disappointing February, the EC-Series is back on track, having registered 7,818 units last month, up 117% YoY. Sure, it’s not the 16,000 registrations of last November, but the little EV continues being disruptive in the Chinese market, winning 6 of the last 7 Monthly Best-Selling trophies. A trendy design helps the EC-Series to be a popular choice in the Chinese Mega-Cities, where the 200 kms range are enough to run around the urban jungle.

#2 – BYD Song PHEV: Build Your Dreams (BYD) current star product had 4,685 registrations in March, the nameplate’s best result in the last 8 months. If the 2018 Best Selling PHEV title seems to be destined to stay with it, one questions if BYD’s “Model Y” can also reach the sales level of the BAIC EC-Series. Consistency seems to be BYD’s forte, so do not expect it to jump much beyond 5,000 units/month.

#3 – JAC iEV7S/E: JAC is one of the EV pioneers in China, selling plug-ins since 2010, and now with its iEV Crossover, it’s back at the game, registering 4.603 units last month. With a competitive price of USD 26,000 before incentives, this is a vehicle targeted at trendy urbanites that for some reason can’t reach a BYD Song or Roewe’s eRX5, getting in return a good-looking compact vehicle (Kia Soul-sized), with just enough power and range (114 hp / 251 kms) to not to make it look bad.

#4 – BYD e5: BYD’s Plain Jane electric sedan, a favorite among taxi-drivers, registered 3,798 units in March, a new record for the nameplate. Offering 97% of the Qin specs (48 kWh battery, 300 kms range, 218 hp) in a less fancy suit, for a significantly lower price, the model is a bit of an unsung hero in the BYD stable, as the 70,000 units sold so far mean that it is the third bestselling PEV, behind the Qin and Tang models.

#5 – BYD Qin PHEV: The most common plug-in in China (140,000 units) had another good performance in March, with 3,361 units, being BYD’s “Model 3” seventh consecutive “3 to 4 thousand units/month” result (Talk about consistency!). Considering a new Qin is coming in a fewmonths, it is surprising the current one is still going strong. As for the new generation, sales above 5,000/month should become the norm, rivaling the Song as the Best Selling BYD.

Outside the top positions, that had no major surprises, there were several positive performances below the podium, like the Hawtai xEV260 compact SUV posting its first four-digit performance (1,350 units), allowing it to show up for the first time on the Top 20, in…#20. Speaking of compact SUVs, the Roewe eRX5 PHEV posted a year best performance, by registering 2,303 units.


Significant changes on the ranking only happened below the Eighth place, but the BYD e5 jump from nowhere into #9 was nothing short of remarkable, and with the Sixth spot not that far away, I wouldn’t rule out three BYD’s on the Top 6 soon.


There were was another nameplate storming through the Top 20, the Tesla Model X returned to the Top 20, in #15, recovering the Best Selling foreign nameplate status, ahead of the BMW X1 PHEV, but despite being surpassed by the Tesla Sports-Minivan-SUV, the German SUV had its best month so far, with 854 deliveries, allowing it to climb three positions, into #16.


Looking at the manufacturers ranking, BYD is back at the leader’s throne, having increased its lead to 7% (24% vs 17%), over the runner-up BAIC, will the Beijing automaker be able to step up the pace and recover ground?


In Third Place we have a close race, with the Shanghai-based Roewe (11%) being closely followed by JAC (10%), this tight duel does not have a clear favorite, but if I had to bet, I would go for Roewe, has the Shanghai carmaker lineup is less dependent from a single model performance. 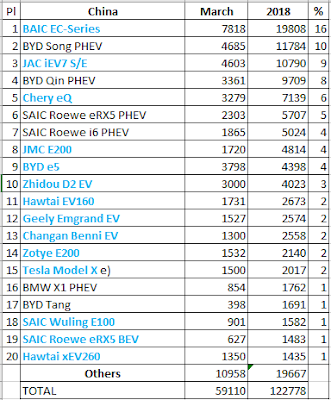