The PEV market is boiling hot in Romania, with the current 228 Plug-ins registered so far this year representing a nine-fold(!) jump regarding last year, with this market selling in just three months what it hadn't in the first nine months of 2017...

Because of this exponential growth, the PEV Share jumped to a record 0.8%, and it's not even higher, because the mainstream market is also growing fast (+28%).
Last year Best Seller BMW i3 started once again in the lead, in its bid to win a third consecutive Best Seller title, but this time it seems that the 2017 runner-up, the Renault Zoe, is running closer, having registered already 43 units, not far from the 49 delivered last year.

Smart is betting heavily in Romania, with its two models in Third and Fourth respectively, the brands best positioning anywhere.

In the manufacturers ranking, BMW is headed for a third consecutive title, having a large 37% share of the market, while Smart and Renault are running for #2, with both having 19% share and 43 units, while Volvo is a distant Fourth Placed, with 7% share. 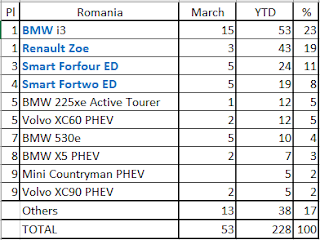