After two "meh" months, Tesla came back to stardom in March, with the Model 3 posting its largest monthly production ramp up (+1.335 units), to 3.820 units, posting its third consecutive monthly Best Seller Award, while the Model S and X deliveries came back to regular levels last month, allowing them to climb to Third and Fourth places in the .2018 ranking.

And we are not witnessing a 100% Tesla podium, because the Second Placed Toyota Prius Prime continues to reach new sales levels, having delivered a record 2.922 units last month, being already responsible for 42% of all Prius sales. The way things are going, it won't be long until the PHEV version outsells the regular HEV, by then, Toyota should to consider if it's worth to keep the unplugged hybrid in the lineup...

Looking elsewhere, the new Nissan Leaf production ramp up (1.500 units in March) is allowing it to climb positions, having reached the Seventh position in March, still far from the podium ambitions that Nissan has for its hatchback, but expect it to climb positions month after month, with the #6 Chevrolet Volt being the "next in line".

In a record month, other players beyond Tesla and Toyota shined, like the BMW i3, which profited from the facelift to register 992 units last month, the nameplate best performance in 20 months, while the Honda Clarity PHEV reached the four-digit area (1.061 units) for the first time, confirming it as a volume model, worthy of a Top 10 presence. 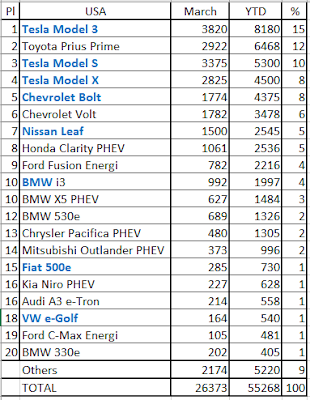 Looking at the full-size vehicles, nothing really new here, the top two continue in their usual positions, with the Model S  profiting from a strong March to recover the Bronze Medalfrom the hands of the Mercedes S-Class.

If all is business as usual in Model S territory, the Model X on the other hand, continues to have a much harder time, being only Eighth its class, recording 4.500 deliveries in a fast growing segment, far from the first positions.