Tesla and Leaf shake the market

The Tesla Model S was once again the Monthy Best Seller, thanks to 588 registrations, allowing it to beat its own record of 576 deliveries, that dated back from December 2013...

Its younger sibling, the Tesla Model X, also reached record heights, with 283 deliveries, that nevertheless weren't enough to make a 1-2 for Tesla last month, because the new Nissan Leaf scored 299 units in its full sales month, a new record for the Japanese nameplate.

Looking at the yearly ranking, the Tesla Model S jumped three positions, into the leadership, while its Model X sibling jumped five places, to #5, behind the Nissan Leaf, that climbed to Fourth. Expect the Japanese hatchback to climb even higher, possibly even threatening the Second Placed VW e-Golf.

Looking elsewhere, the Porsche Panamera PHEV is now the Best Selling PHEV, in #9, thanks to 35 registrations last month, while the Smart Forfour ED joined the Top 20, in #16. 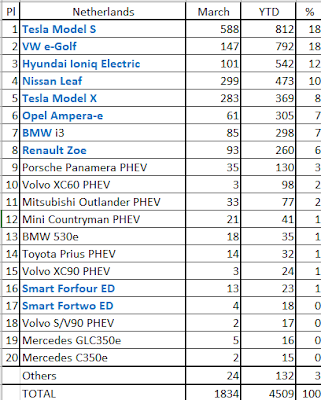 If we add regular hybrids to plug-ins, the Toyota Yaris returned to the leadership, with 665 units, followed by the Tesla Model S, with three other HEVs (Two Toyota and one Kia) filling the remaining positions.


Looking at the March registrations data, the Tesla Model S managed to almost steal the First Place from the BMW 5-Series, ending in Second Place, with the remaining competition ending far behind.

Big SUV's had a big hit with the end of PHEV incentives, and only the Volvo XC90 manages to have significant sales, but once the Tesla Model X deliveries are in full swing, like it was the case of last March, a last-month-of-quarter peak, there's really no competition for the American Sports-Minivan-CUV.

A mention for the Third place of the LR Range Rover Sport, a positive result that could be reinforced in the future, once the PHEV version deliveries arrive.
Published by José Pontes at April 12, 2018