Zoe #1, but Leaf is rising
We start the March Madness monthly report with Spain, that despite the lack of incentives, it is as hot as ever, up 62% to 755 units in March, pulling the yearly tally to 2.194 units, with the PEV Share at 0.6%.

Looking at the best sellers, if the Renault Zoe was for the sixth month in a row Number One in March, with 150 deliveries, the new Nissan Leaf is starting to spread its wings, having delivered 91 units (#2 in March), the nameplate best performance in three years, having risen three positions in the 2018 ranking, to Third.

Expect the Nissan hatchback to continue improving, possibly reaching Second Place in April, time when it will be a race to recover ground on its French cousin, in a bid for the Spanish title.

- After a slow start, the Tesla nameplates finally came into their usual selves, with the Model S scoring 30 units, jumping to #16 in the YTD chart, while the Model X delivered 32 units, the nameplate best result ever in Spanish soil, allowing it to climb also into the Top 20, in #17;

- The Porsche Panamera PHEV also shined, thanks to 31 registrations, its best result since June, allowing it to jump four positions to #9, a brilliant result for the six-figure vehicle.

On the manufacturers ranking, Renault (16%, up 1%) is in the lead,  followed at a safe distance by Smart (11%, down 1%), while the Third Place is being hardly fought by Mitsubishi, BMW (Both with 10%) and Volkswagen (9%), but with Nissan (8%) coming strong from behind, expect the Japanese brand to surpass their adversaries and establish itself in Second Place soon. 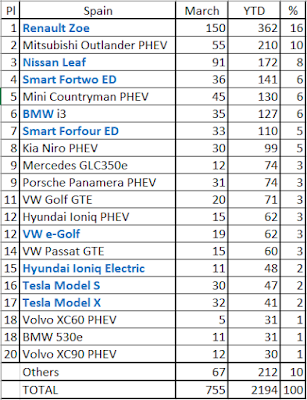